As ever, In My Mailbox, is a weekly meme hosted by the lovely Kristi at The Story Siren. IMM showcases the books that us bloggers have recieved during the week. The books listed below are books that I've bought new, second hand in charity shops, were sent to me via the publisher or author for review, borrowed from friends or acquired via a book swapping website.

Just FYI, this will be my last IMM until after February. I'm dedicating the month of February to love and will only be writing love-centric posts and reviews. IMM will commence on my blog again during the first weekend in March.

Across the Universe by Beth Revis -A love out of time. A spaceship built of secrets and murder.

Seventeen-year-old Amy joins her parents as frozen cargo aboard the vast spaceship Godspeed and expects to awaken on a new planet, three hundred years in the future. Never could she have known that her frozen slumber would come to an end fifty years too soon and that she would be thrust into the brave new world of a spaceship that lives by its own rules.

Amy quickly realizes that her awakening was no mere computer malfunction. Someone-one of the few thousand inhabitants of the spaceship-tried to kill her. And if Amy doesn't do something soon, her parents will be next.

Now Amy must race to unlock Godspeed's hidden secrets. But out of her list of murder suspects, there's only one who matters: Elder, the future leader of the ship and the love she could never have seen coming.

Absolutely thrilled and excited to have my own copy of Across the Universe by Beth Revis. I've only heard really wonderful things about the book and I'm looking forward to be swept away by this book like so many other bloggers...

I Am Number Four by Pittacus Lore - John Smith has just arrived in Paradise, Ohio, just another stop in a string of small towns where the 15-year-old has been hiding out from the Mogadorians. Those terrifying aliens are hellbent on destroying him and the other nine Loric children who have sought refuge on Earth. The Mogadorians are picking off the surviving kids in numerical order. The first three are dead and John's number is up. Will his Legacies, his defining super powers, develop in time for him to fight against the enemy? I Am Number Four is a breathless page-turner of a sci-fi novel that will have readers rooting for the teen alien who must unleash his fire power to save himself, his human friends, and the planet.

I've already read I Am Number Four by Pittacus Lore, but this is the shiny new paperback edition. I'm hoping to see the film at the cinema and possibly share the book with some of my male friends.

Between Shades of Gray by Ruta Sepetys - Lina is just like any other fifteen-year-old Lithuanian girl in 1941. She paints, she draws, she gets crushes on boys. Until one night when Soviet officers barge into her home, tearing her family from the comfortable life they've known. Separated from her father, forced onto a crowded and dirty train car, Lina, her mother, and her young brother slowly make their way north, crossing the Arctic Circle, to a work camp in the coldest reaches of Siberia. Here they are forced, under Stalin's orders, to dig for beets and fight for their lives under the cruelest of conditions.

Lina finds solace in her art, meticulously—and at great risk—documenting events by drawing, hoping these messages will make their way to her father's prison camp to let him know they are still alive. It is a long and harrowing journey, spanning years and covering 6,500 miles, but it is through incredible strength, love, and hope that Lina ultimately survives. Between Shades of Gray is a novel that will steal your breath and capture your heart.

This book sounds incredible. Really powerful and emotional. I watched a small trailer in which the author spoke a little bit about her research and some of the interviews that she carried out during the writing process and I nearly wept. I feel like this one will really pull at my heartstrings. At least I hope so.

I haven't read the Time Raiders books before, but I think it sounds like an incredibly interesting concept. I've been reading books lately that have some historical elements to them and I've been quite surprised at well how I've been liking those historical details. This is the third book in the series, so I shall be hunting down the first two books very soon. Has anyone read these books? What did you think of them? Would love to hear someone, anyone's thoughts on these. Did you know he's brothers with Simon Scarrow, who has a YA book out soon about Roman gladiators? Well, I'm looking forward to reading both series. 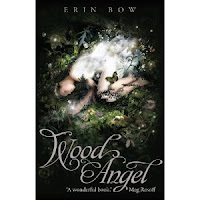 She has a gift for carving ‘lucky’ wooden-charms. Known as Witch-Blade, her unusual gift attracts dangerous attention in a place where witches are burned. When her village falls on bad times, suspicion falls on Kate. Scared for her life, she seeks the help of a mysterious stranger.

In exchange for her shadow, the stranger will assist her, but Kate becomes part of a terrifying plan, darker than she ever dreamed.

First published in the USA as Plain Kate, this is the heartfelt story of an orphan ‘witch-child’ and her cat, caught in a time afraid of magic.

Doesn't this have the most gorgeous cover? I think it's very pretty with the shiny words and little circles on the cover. And butterflies. Did I ever tell you like that I like butterflies? Anyway, I've read a couple of really great reviews of this one, so I'm hoping that it lives up to my expectations. 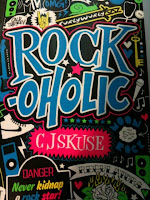 Rockaholic by CJ Skuse - Jody's obsessed with a rock star. At Jackson Gatlin's concert, she's right at the front. But when she's caught in the crush, Jody's carried backstage. Throw in concussion, a super-wired super-star, and a Curly Wurly - and she finds herself taking home more than a poster. OMG! Jody's kidnapped him. But what happens when the rock god in her garage doesn't want to leave? Jody's stuck between a rock idol and a hard place!

How much fun does this one sounds? Kidnapping a rock star? Yes please, I'll read that. Super excited to get to this one. I don't know what it is about this combination of music and YA books that gets to me, but I'm always looking for a good book that involves music in some way. How would I feel about being in the same space as my favourite rock star? (Who IS my favourite rock star? Who's yours?)

The DUFF by Kody Keplinger - Seventeen-year-old Bianca Piper is cynical and loyal, and she doesn’t think she’s the prettiest of her friends by a long shot. She’s also way too smart to fall for the charms of man-slut and slimy school hottie Wesley Rush. In fact, Bianca hates him. And when he nicknames her “the Duff,” she throws her Coke in his face.

But things aren’t so great at home right now, and Bianca is desperate for a distraction. She ends up kissing Wesley. Worse, she likes it. Eager for escape, Bianca throws herself into a closeted enemies-with-benefits relationship with him.

Until it all goes horribly awry. It turns out Wesley isn’t such a bad listener, and his life is pretty screwed up, too. Suddenly Bianca realizes with absolute horror that she’s falling for the guy she thought she hated more than anyone.

I knew as soon as I heard what DUFF stood for that I wanted to read this one. Don't we ALL sometimes feel like the ugly, fat friend? I know I did growing up. And I have to giggle at the term 'enemies with benefits' - I hope this one is as fun as it sounds!

My Soul to Save by Rachel Vincent - “If she were going to die, I’d already be screaming. I’m a banshee. That’s what we do.”

The last thing Kaylee needs right now is to be skipping school, breaking her dad’s ironclad curfew and putting her boyfriend’s loyalty to the test. But starry-eyed teens are trading their souls for a flickering lifetime of fame and fortune in exchange for eternity in the Netherworld — a consequence they can’t possibly understand. Kaylee can’t let that happen, even if trying to save their souls means putting her own at risk....

OH MY GOD! How excited am I to read this one?! I absolutely ADORED My Soul To Take when I read it last month! The characters and the stories of this one have me absolutely eager to see where the story will go next. I know it's been out in the US for ages, but I'm only just discovering this series. And I'm in love.

Lament by Maggie Stiefvater - Sixteen-year-old Deirdre Monaghan is a painfully shy but prodigiously gifted musician. She's about to find out she's also a cloverhand—one who can see faeries. Deirdre finds herself infatuated with a mysterious boy who enters her ordinary suburban life, seemingly out of thin air. Trouble is, the enigmatic and gorgeous Luke turns out to be a gallowglass—a soulless faerie assassin. An equally hunky—and equally dangerous—dark faerie soldier named Aodhan is also stalking Deirdre. Sworn enemies, Luke and Aodhan each have a deadly assignment from the Faerie Queen. Namely, kill Deirdre before her music captures the attention of the Fae and threatens the Queen's sovereignty. Caught in the crossfire with Deirdre is James, her wisecracking but loyal best friend. Deirdre had been wishing her life weren't so dull, but getting trapped in the middle of a centuries-old faerie war isn't exactly what she had in mind . . .

Yeah, yeah. I know that I've told absolutely BILLIONS of other people that I don't like books about faeries. At least that many people, AND YET, here's me picking up another one. I wouldn't do it without some severely good recommendations OR unless it's Maggie Stiefvater. In this case, it happens to be both.

The Medusa Project: The Set-Up by Sophie McKenzie - The first title in a thrilling new series about four teenagers with psychic abilities, from Red House award-winning author, Sophie McKenzie.

I've been meaning to read a book by Sophie McKenzie for awhile. I thought it would be Girl, Missing or Blood Ties, but no. I'm going to start with The Medusa Project, I think. Seems like a lot of fun. Can't say that I've heard much about this particular series, but I keep hearing good things about Sophie McKenzie, so I shall leap right in completely blind. I don't do that often enough anyway!