REVIEW: The Mockingbirds by Daisy Whitney 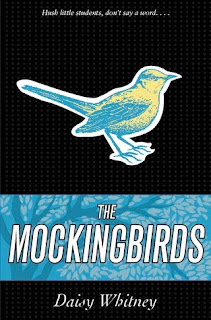 Some schools have honor codes.
Others have handbooks.
Themis Academy has the Mockingbirds.

Themis Academy is a quiet boarding school with an exceptional student body that the administration trusts to always behave the honorable way--the Themis Way. So when Alex is date raped during her junior year, she has two options: stay silent and hope someone helps her, or enlist the Mockingbirds--a secret society of students dedicated to righting the wrongs of their fellow peers.

In this honest, page-turning account of a teen girl's struggle to stand up for herself, debut author Daisy Whitney reminds readers that if you love something or someone--especially yourself--you fight for it.

I'd been hearing a lot about this one, so when The Mockingbirds by Daisy Whitney came up on the UK Book tours, I was really excited. Thank you to Lynsey for organising it for us. I'm really glad that I signed up for it, because this book is amazing. What made it even more heartbreaking of a read for me is the knowledge that the author went through these same experiences with date rape in college.

This book started off really hard-hitting. Alex wakes up naked and in a boy's room. She has no recollection of the events of the previous night but a lingering sense of not-right. It's only as she's recounting what little that she remembers of the night to her roommate and to her sister that what has happened can be described as date-rape. Not willing to go to the police and be humiliated and dragged through the courts, Alex decides to take her case to The Mockingbirds, a secret honour society that tries to right the wrongs committed within the school because the school board seems to turn a blind eye.

The Mockingbirds, a secret society based loosely on the court trial in Harper Lee's To Kill a Mockingbird, was established a few years earlier by Alex's older sister, but Alex knows very little about it. When bringing her case to the Mockingbirds she is able to learn more about how the society runs, the punishments it doles out and her sister's involvement in the whole thing. I didn't much care for the vigilante-type punishment, which is my only negative thing to say about the book. But I really admire the author for bringing such a difficult topic into YA. Date rape isn't something that I've read about, and it was interesting and eye-opening to see how Alex copes and deals with her experiences throughout the course of this novel.

I especially loved how Alex viewed herself as different aspects of herself: Music Girl, the Date Rape Girl and the transformation of herself back into Just Alex. I loved that she has supportive friends and her sister there with her. I think that support is absolutely vital for anyone in similar circumstances and the evolving relationship with Martin was very sweetly done. I also loved the music. Alex really needed something to escape into in order to deal with everyone, and with the piano and music she is able to.

A lot of The Mockingbirds is quite difficult to read. All the detail about the rape itself, from the beginning as well as flashbacks that Alex has as she prepares for trial can be hard for the reader. I found myself relating to Alex in such a way that I felt like I was experiencing her shame and guilt myself. Again, the author's personal experience has made Alex's story very realistic and believable, and I applaud Daisy Whitney for sharing this aspect of herself and with readers. I really hope that it helps others to feel less alone and have the courage to stand up for injustices in their lives or the lives of those around them.

As I said, the only negative thing that I have to say about this book is that I felt really uneasy with some of the punishments and actions of The Mockingbirds. It felt a little vigilante and I would have been a lot more confortable with it if the society were approved and run within the academy. The punishments begin before the trial begins based only on the version of events from Alex's perspective. It doesn't seem quite fair. I can understand that those punishments doled out at that point were only to show the offending person that the society means business, but I lost a little respect for them when they treated him like a criminal before hearing all the facts.

Still, I very much enjoyed this book. I was rooting for Alex throughout the entire novel. It felt very personal and emotional and I'm really glad to have read it. At times a little preachy, The Mockingbirds has a great message to stand up for yourself and there is a good reason to stand up and fight.
Written by Michelle Fluttering Butterflies at 09:17