REVIEW: From Notting Hill With Love ... Actually by Ali McNamara 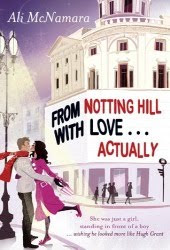 Scarlett O'Brien is in love . . . with the movies. Utterly hooked on Hugh Grant, crazy about Richard Curtis, dying with lust for Johnny Depp, Scarlett spends her days with her head in the clouds and her nights with her hand in a huge tub of popcorn.

Which is not exactly what her sensible, DIY-obsessed fiancé David has in mind for their future. So when Scarlett has the chance to house-sit an impossibly grand mansion in Notting Hill ? the setting of one of her all-time favourite movies ? she jumps at the chance to live out her film fantasies one last time. It's just a shame that her new neighbour Sean is so irritating ? and so irritatingly handsome, too.

As a chaotic comedy of her very own erupts around Scarlett, she begins to realise there's more to life than seating plans and putting up shelves. What sort of happy ending does she really want? Will it be a case of Runaway Bride or Happily Ever After? The big white wedding looms, and Scarlett is running out of time to decide.

Right from the first time I saw this on someone else's blog, I knew I wanted to read From Notting Hill With Love ... Actually by Ali McNamara. You could say this book had me at .. the title. I adore chick-flicks, I really do. Only I didn't realise how deep that adoration went until I won this book in a competition. (The person who answered the most chick-flick related trivia questions correctly won the book. I answered 9/10!) And when chick-flicks come together like they do in this book, only good things can happen.

Scarlett is mad about the movies. She's in the popcorn-machine business, so spends a lot of her time there. But when her daydreaming about famous film stars and being in the movies gets in the way with her relationship with her fiance David, Scarlett decides to take a break from her life. Prove to her disapproving father and David, that things that happen in the movies can happen to her in real life too. By a wonderful coincidence, she is able to house-sit for a month in Notting Hill and straight away she's able to collect the first of her 'movie-moments' - standing in the travel bookshop that Hugh Grant owned in Notting Hill. Dress shopping like Julia Roberts in Pretty Woman. So, so much of this book made me happy. I had a huge smile on my face as I followed Scarlett on her weird journey to happiness.

During the course of From Notting Hill, Scarlett really needs to decide what it is she wants from her life and what will make her happy. There's her annoying neighbour Sean, who seems to threaten her relationship with David. There's the mystery that surrounds her mother's disappearance from her life so many years ago. And as she gets to the bottom of both her romantic life and her past, Scarlett has so many wonderful experiences. I absolutely cracked up during the two weddings (I badly want to go to ANY themed wedding, Scarlett-style!) - and Scarlett is such fun anyway. I love it each time she tries to manipulate her movie moments and they end horribly or embarassingly. I haven't laughed so much at a book in awhile.

The relationship between Scarlett and Sean really pulled at my heartstrings and led up to so many scenes that just made me go 'AWWW!' This book is sweet and romantic and and it's absolutely filled with references to all of my favourite films. Notting Hill, Love Actually. Pretty Woman, An Affair To Remember. After reading this book I really want to just go spend some time in Notting Hill ... and listen to more Ronan Keating.
Written by Michelle Fluttering Butterflies at 09:35