What influenced my idea of love

When I was brainstorming ideas of posts for love month, I kept returning to the same thing: my conflicting idea of what love is. On the one hand, I'm a big, soppy romantic who loves mushy films and music and books. And on the other hand, I described my version of love to a friend recently as 'broken with jagged edges.' And obviously that description doesn't really fit with my relationship with N or with my children. It seems as though I'm holding onto an outdated version of love, and I thought it'd be interesting idea to explore some of my reasons for that. By looking at the experiences, the music, the films and the television programmes that shaped my idea of what love is and what love can be.

Growing up, I loved Disney films. I still do. But I remember watching the really girly, romantic ones the most. I loved The Little Mermaid and Beauty and the Beast and Cinderella so much. I don't ever particularly remember being a very girly-girl growing up, but I've always had a real soft spot for this princessy Disney films. I'm glad, now, that Disney are producing films with characters that are better role models for young girls though. 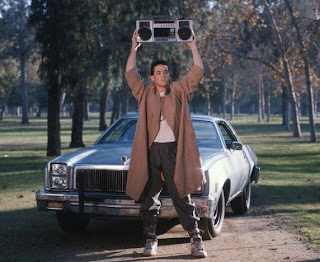 But Disney didn't last forever. Soon, I was more interested in watching Sixteen Candles and Pretty in Pink. I think I annoyed everyone in my family (both then and now) by watching Dirty Dancing over and over again. But for me, it was Lloyd Dobler who utterly and completely stole my heart.

At the same time, I find that I relate more to love stories where one person seems to be broken. Partly because I view myself this way, and it's always nice to see love stories with such huge obstacles being overcome and having a happy ending. Movies like When A Man Loves A Woman, where Meg Ryan's alcoholism breaks up her marriage, or Crazy/Beautiful where Kirsten Dunst plays a wild girl who's completely messed up after the suicide of her mother.

Growing up, I never really listened to contemporary music. When my best friend went mad over New Kids on the Block I had no idea how to respond to her. Instead, our family mostly listened to lots of 60s music. My favourite of the bunch? Diana Ross and The Supremes. Now there's a lady who sang a bunch about love. But I also really loved Marvin Gaye, especially his 'I Heard It Through the Grapevine' and when My Girl with Macaulay Culkin came out, it renewed my love of The Temptations.

I've written before about my mom's love for What's Love Got To Do With It by Tina Turner, and I still have a soft spot in my heart for that song. More recent additions to my favourite music appear on the soundtrack to the television show, Roswell. Especially I Shall Believe by Sheryl Crow and Save Yourself by Sense Field. Despite the absolute cheesiness of this video, I still love the song a lot (almost too much) and of course, Roswell.

Other than Roswell, which I mentioned in the music section, I think that the television programme that had the biggest influence on me was My So-Called Life. I loved the complexities of the relationships in that show. From Graham's infidelities to Angela's conflict between the intellectual and the physical (Brian and Jordan). I fell in love with Jordan right alongside Angela. The fact that she pines after Jordan forever, is then a couple! and then breaks up with him and then feels so betrayed when Rayanne and Jordan hook up makes my heart break everytime I think of it. I'm so glad that #MSCLRW is back so I go again relive my all-consuming love of My So-Called Life! 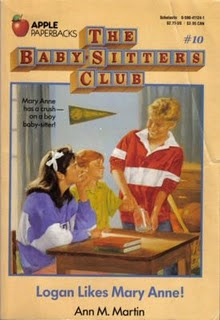 I will soon be writing a post about the books that I've loved growing up, but for now, in terms of love, I remember Claudia and Logan from The Babysitter's Club being the first couple that I really loved and was rooting for!

Soon enough though, I was reading all about Anne Shirley and Gilbert Blythe and completely lost interest in the Babysitter's Club. Then a lovely, lovely school librarian recommended to me the Complete Works of Jane Austen and I was hooked. Jane Austen taught me so much about love. I heart her and my life would be entirely different without her.

But I think what really made the most impact on my idea of love is what I witnessed growing up. My parent's relationship was less than ideal. I was told my entire life that they were never together out of love for each other, but more so my dad's attachment towards my older brother. When I was born (by accident, and how I loathed the idea of being a mistake), it kind of cemented my parents' relationship. Growing up in a household with a loveless marriage does not make for a wonderful atmosphere.

And it was a pretty toxic place to live. I won't go into specifics, but there was a combination of emotional and physical abuse as well as a pretty high level of neglect. Whereas my brother turned towards anger and made terrible (law-breaking) choices, I feel as though I turned all the confusion and anger that I felt inwards. By the time I was a teenager, with both parents rejecting me in ways that were very hurtful and traumatic, I didn't believe that I was worth loving. I didn't feel as though I were capable of love - loving myself or anyone else or that anyone would ever come to love me.

And these are the feelings that I still struggle with today. Despite all of the overwhelming evidence that goes against those beliefs. I have a wonderful husband, who despite all of my efforts to push him away and convince him that I'm not worth it, has stayed with me. And together, we have a beautiful family. My ideas of love change and are strengthened every day by watching my children. Every day, I walk towards a place where my childhood doesn't have such a strong hold on my life today. I'm not quite there yet, but I'm taking my small steps towards it.

What influenced your ideas of love?
Written by Michelle Fluttering Butterflies at 16:32