Playing around on GoodReads earlier today (how much do I love GoodReads, by the way?!) and I noticed a feature that allows me to see a list of books I've read and order them by the number of ratings the books have recieved. This is something that I've been thinking a lot about recently - reading books that aren't necessarily the huge blockbusters or the popular books that EVERYONE is raving about.

Here are the books that have 10 or fewer ratings on my GoodReads account. Perhaps another day, I'll do a post on the books with 10-20 ratings!

The Killer's Daughter by Vivian Oldaker - 2 ratings I was lucky enough to have this book sent to me direct from the author. I read it during Anti-Bullying Week last year and really loved it. I think the novel really touches on some interesting subjects, from school bullying to justice. Despite the overly pink cover, I think it is one that would be enjoyed by both male and female readers.

Our main character, Emma, is forced into moving away from her home after allegations that her father was involved in the death of her grandmother. Despite the taunting and bullying that Emma is met with at her new school, she also finds a friend in Bruce. Together, Emma and Bruce travel to Greece in order to gather any information available in order to clear her father's name.

There's a bit of murder-mystery there and some very tense moments, but there's also a very sweet and believeable, burgeoning relationship between Emma and Bruce. Honestly, this book was absolutely lovely to read and I would love it if more book bloggers were behind this book.

Boy Vs. Girl by Na'ima B. Robert - 5 ratings Here's another book that I recieved direct from the author. I'm really glad as well, particularly as I feel it's very important that people from all backgrounds and perspectives are shown within literature - diversity, for me, is very much wanted and needed. And this book, and another book by the same author (From Somalia With Love), gives a voice to teenage Muslims.

In this book, a brother and sister struggle with fitting in, falling in love and peer pressure. But they must also do this under difficult circumstances - how do they balance out the traditionalism of their parents with modern Britain? How does their Muslim faith affect their lives and how they are treated and viewed by those around them?

I really loved the gentleness of this novel. I loved the way in which Ramadan played an importance to the book, giving a peek into the lives of a typical British family. A very sweet and gentle story, it was a really refreshing book to read.

The Dead by David Gatward - 9 ratings I won this book in a competition on Twitter. I hadn't read many YA horror books before it, but I found myself quite drawn into the gruesomeness of The Dead.

I love that it's the first book in a new series of books that won't be drawn out at all (I've already seen the sequel floating about!) and that's so action-packed. There's lots of gory scenes and frightening events that could really appeal to male readers.

Lazarus Stone and his best friend Craig are just two typical teenagers, when one night they learn that the thin veil that separates their world from that which the dead reside will soon burst open and a torrent of angry demons will rip through and cause death and destruction to life as they know it. Lazarus must track down his father and along the way piece together all of the new information he's learnt recently in order to what he can to protect his way of life. I loved the emphasis on how little children (and this can be of any age) really know of their parents.

I thought it a very promising start to a horror series! 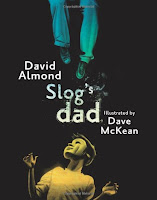 Slog's Dad by David Almond - 10 ratings I'd heard absolutely nothing about this book before I picked it up at the library and read it while my boys were playing in the children's section. I admit, it is quite short, and I was finished in less than half an hour. But with text by David Almond and the illustrations by Dave McKean, I felt like it was a book I really couldn't pass up on.

The story itself is quite sweet. There's two boys, Slog and his friend Davie. Davie doesn't believe that people come back after death, but Slog does. In fact, he's convinced that the homeless man he sees in the street is his dad come back to check on him.

The reader is then told the circumstances of the death of Slog's Dad and with Dave McKean's haunting illustrations we can see the effect that it's had on poor Slog and his mother. The hope that still burns brightly within Slog is both sweet and hard to read.