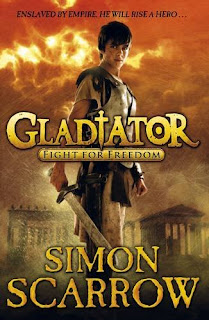 It's Rome, 61 BC. Recruited as a gladiator, young Marcus Cornelius Primus faces a new life of brutal training, governed by strict rules, as he learns the skills of an elite warrior. But Marcus cannot simply forget his past. His father lies murdered by soldiers and his mother has been kidnapped and forced into slavery. Marcus is determined to find his father's old commander, Pompeius the Great, to seek justice for his family and set his mother free. Yet, unbeknown to him, Marcus is hiding a life-threatening secret. And if the Romans discover it, there will be no escape...

A big thank you to the people at Penguin for sending me this book for review! When I first saw the book, I immediately thought 'oooh, there's something I haven't seen much of in YA' and I like when that happens. I like when things are new and different. And Gladiator, this first book for children by Simon Scarrow, is quite a fun read. With it's action scenes and violence and gladiator training, this is one sure to attract boys, but I found myself really gripped by the story and the characters as well.

Marcus is our main character, a smart 10 year old, growing up on a farm with his parents during the Roman times. When his father is murdered, Marcus and his mother are captured as slaves. When Marcus escapes and is later caught, he is then sold on to a gladiator school in order to help train him in fighting and the methods of survival as a gladiator. Marcus is very intent on getting into Rome to see his father's old commanding officer, who Marcus thinks will help free him and his mother from slavery. But first, Marcus must survive the brutal training and the poor conditions of being a slave in Roman times.

There is quite a lot of detail here describing the way of life and treatment of slaves. There are brief references to Spartacus, made famous for his slave rebellion and it is clear to see how and why so many Roman slaves came to feel this way about those who have oppressed so many people and for such an extended period of time. There's a real sense that these slaves, especially the ones Marcus meets on his travels, serve only purposes of labour and entertainment when they go to be mauled or killed during gladiator games.

And Marcus is really quite young, over the course of the novel he does turn 11, but still, it is a lot for one young boy. Marcus is very brave and goes through a great deal, especially after another boy in the school sets his eye on destroying Marcus. For all of that, he still maintains this level of decency and morality. There's a strength about Marcus that made me really cheer for him.

There's a lot going for this book, the interesting setting, the fast-paced adventure story, a mysterious secret that could change everything, and a great main character who readers will root for. I'm very glad I read it and can recommend it!
Written by Michelle Fluttering Butterflies at 09:01