REVIEW: A Note of Madness by Tabitha Suzuma 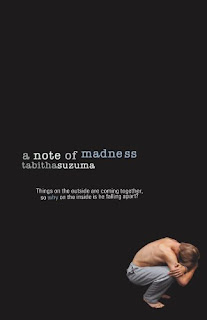 Life as a student is good for Flynn. As one of the top pianists at the Royal College of Music, he has been put forward for an important concert, the opportunity of a lifetime. But beneath the surface, things are changing. On a good day, he feels full of energy and life, but on a bad day being alive is worse than being dead. Sometimes he wants to compose and practise all night, at other times he can't get out of bed. His flatmate Harry tries to understand but is increasingly confused by Flynn's erratic mood swings. His friend Jennah tries to help, but Flynn finds it difficult to be around her as he struggles to control his feelings and behaviour. With the pressure of the forthcoming concert and the growing concern of his family and friends, emotions come to a head. Sometimes things can only get worse before they get better.

A Note of Madness by Tabitha Suzuma is a really hard-hitting read. It wasn't easy reading about Flynn's experiences with bipolar disorder, and at times I felt almost overwhelmed with emotion whilst reading this book. So much of what Flynn experiences and feels are portrayed in such a way that it was very difficult for me to separate myself from Flynn. Despite having no previous experience with manic depression, I really felt like I had a much better understanding after reading A Note of Madness especially going through it all with Flynn, as Flynn.

Flynn is one of the top pianists at the Royal College of Music in London. He's a well respected musician and is under quite a bit of pressure to become better and just constantly improve in such a competitive environment. When Flynn is put forward for a very prestigious concert by his mentor, Flynn should be overjoyed at this wonderful opportunity. He worked hard in order to get into the Royal College of Music, and Flynn feels another pianist is more favoured, so this is Flynn's chance to prove everyone wrong. I really love the role that music plays in A Note of Madness. I'm not in any way musical, but I'm always drawn to stories where characters like Flynn that have such a passion for music.

But things are not entirely right in Flynn's life. Some days Flynn can't bring himself to get out of bed and he'll lie there for days on end, unable to function in any way. Other days he throws himself into his work, composing operas and his enthusiasm and full-of-life attitude are infectious and all-consuming. But these drastic shifts in mood are difficult for Flynn's friends to handle and it all becomes too much when Flynn's down periods become more serious and there is risk of him hurting himself.

I also really love Flynn's friends - his flatmate and best friend, Harry who tries so hard to understand and get help for Flynn when he is at his worst, calling in Flynn's older brother. Jennah as well, though in a different way. You can really feel how much Flynn cares for Jennah and how much he torments himself by thinking that Jennah would never care for him in the same way. Flynn really pulls away from Jennah a lot during the story and there's this awful tension and build-up in the relationship between Flynn and Jennah that is almost difficult to witness!

In fact, a lot of A Note of Madness is difficult to witness. So much of Flynn's mood swings, his irritability, his severe depression is so intense and more than a little bleak that it can be hard as a reader to buoy yourself up and continue. We see so much of the story from Flynn's perspective that the tone of this novel can be heavy at times, even after Flynn seeks medical help and he learns that the medication he is to recieve will make him feel a lot worse before he can even begin to feel a little better. Thankfully Flynn does have a support system in place and he is able ultimately to find hope and a reason to keep struggling and fighting towards something better.

I will be very interested to read the sequel to this story and anything else that Tabitha Suzuma writes. She has a wonderful ability to pull readers into her stories so brilliantly and I love that she tackles some very serious topics in her books. Reading her website, I see that she has written about mental illness from her own very personal experience and I applaud her outstanding effort with this book.
Written by Michelle Fluttering Butterflies at 12:20