Today's Awesome Women interview is a bit different (though no less awesome!), as I grew up with the interviewee! We went to middle and high school together so I have a pretty good idea of what she was like a teenager :)

For all the rest of you, let me present Becca, who blogs about baking at The Watson Kitchen! 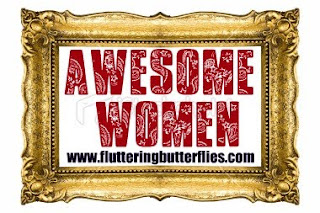 Well, I'm 28 years old. I've been married for almost 3 years (March 16th is our anniversary!). I've lived in the south for way too long, but have accepted that I'm now a "Southern girl". Oh and I'm told I have the accent to go along with that.. Right now I'm a housewife, only because I have not been able to find a job. My husband is a full time student at the University of Texas Arlington. He is studying physics, but has a deep passion for cooking. Which goes well with my need to bake things..

Growing up, I don't really remember looking up to anyone.. Well, maybe Kat from the "10 Things I Hate About You" movie! I loved Kat and wanted to be just like her!

Now? Hmm.. I have 2 people I look up to. My mom and my friend Ginny. They both have a few things in common. Mom raised 7 kids, 2 of which were handicapped, and she's still sane! lol! She is still taking care of my sister and brother, and I don't know how she does it! Ginny has 3 kids of her own, then adopted 3 more kids. She recently got a call and was asked to take in 2 more kids that are half related to the 3 she adopted. Being the awesome woman she is, she took them in. I guess I look up to them, because even though I'm from a big family, I don't think I would have the strength to care for that many kids! 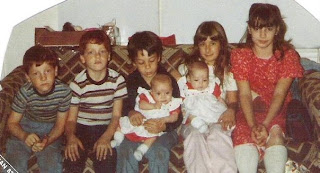 This photo is of Becca with her six siblings!

You're gonna laugh at me.. When I was a kid, I wanted to be the Garbage Man! I remember when we lived in California there was a Garbage Man that would always talk to me when he picked up our trash. He was so nice and I wanted to be just like him! 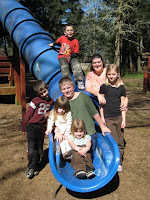 Hmm.. I guess Ginny, who I mentioned above, was a big influence on me during high school. I lived with her and her family for a year when I was 16. We are still really good friends to this day. As I mentioned above, Ginny has a really big caring heart! Not only does she have a total of 8 kids (!) she volunteers at her local food pantry, take the kids to sports practice, and still finds the time to bake and can items for her neighbors and friends. I don't know how she manages to do everything she does with all those kids!

Hmm.. That's a tough one. I'm not sure I really have a favorite fictional character. I'm not even sure I can name a favorite book.. It use to be White Oleander by Janet Fitch, so I guess I would have to go with Astrid from that book. Her character was someone you could relate to. Maybe not by having the exact same issues, but just following her through her life and issues with her mom.. I don't know. I just really liked her.

Ha! I don't think I coped very well as a teenager.. I was a very angry teenager. My teen years were spent with my mother comparing me to my older siblings and accusing me of doing all the things they did when they were my age. So I figured if you're going to accuse me of doing something I might as well do it! So I skipped school, started smoking, drank, got sent to a church school to keep me out of trouble.. Let see what else? Oh yeah, I got suspended from said church school, dropped out of school, got my GED and moved as far away from my mother as I could.. It felt like when my mother wasn't accusing me of something she was ignoring me.. I had a lot of jealousy issues over her paying more attention to my sister.. 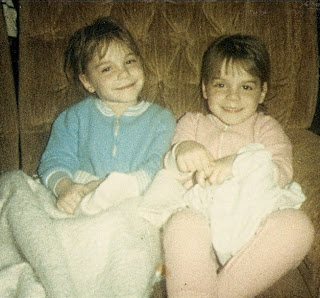 Suck it up and move along. Life is not as horrible as you think! Mom is only doing what she thinks is best for us. Being sent to Lifegate is not the end of the world, you will meet some awesome people there that your still friends with to this day. Don't start smoking either. It's a horrible, nasty habbit!

I don't really know how to answer this one.. I mostly read romance novels.. The only issue those women have is their love life.. I guess it's nice always reading a romance knowing its going to end with happily ever after. Knowing that you can escape your realationship problems in the pages of a great book..

Is there anything else you'd like to add?
Not really.. These were some great questions. I can't wait to see what others answered!

Thank you Becca! And what wonderful photos :) Please do visit Becca at The Watson Kitchen!

And if you are reading these interviews and thinking that you'd like to take part as well, please do leave a comment or send me an email.
Written by Michelle Fluttering Butterflies at 09:21