REVIEW: Mistress of the Storm by ML Welsh 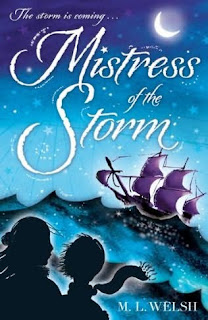 The wind blew fast and clean straight into Verity's lungs. Even from the downs she could smell the salt spray - fresh and cold - and hear the crash as the Storm ploughed head-on into green and churning waves. Sea water washed over her prow and drained back in torrents of foam. Verity Hunter is just a normal, lonely little girl who has never quite fit in. But suddenly it's down to her to solve the riddle of an ancient pledge and protect her family from the evil Mistress of the Storm. What hope does she have against a witch so powerful that she can control the wind and create storms at will? Luckily, Verity does not have to face her enemy alone. As events begin to spiral out of control, she finds two loyal and steadfast friends to stand by her side. The Storm is coming. And it will change Verity's life forever.

There's something so refreshing about reading a book aimed at a slightly younger audience that I'd normally read. And it was an absolute joy to read Mistress of the Storm by ML Walsh. In it, she created some lovely characters and story that had me captivated throughout.

Verity Gallant is a fab main character. Right from the beginning, I was able to relate to her, as she felt she lived in her sister's shadow and thought of herself as large and plain. Her mother has just announced that she is pregnant again and pays little attention to Verity. Picked on by local bullies, Verity is lonely and friendless and hides in the library and at the home of an elderly woman who tells her stories. My heart really went out to poor Verity.

One day, at the library, a stranger hands Verity a strange book and gives her this one cryptic message - 'The storm is coming.' With that, Verity's entire life changes as she begins to uncover the secrets of her seaside town, Wellow, and the secrets of her own family. When a grandmother that Verity never knew she had comes to stay, it becomes more apparent to Verity that bad things are at play. Through the book she has been given, Verity learns that the 'Mistress of the Storm' is an evil witch who can control the weather and the legend of this witch is tied into the local history of Wellow.

Can Verity stand and face such an evil and powerful witch that threatens the life that she leads, the family who she loves and the town in which she lives in? Luckily Verity isn't alone in this battle, as the bonds of friendship and loyalty with her two new friends, Henry and Martha are strong. I really, really loved how much friendship played a part in this book. Especially between Henry and Verity. Her friends give Verity such support and strength that she is able to be more confident when facing her fears.

I loved the seaside setting! The sailing and the sea lore and the history of piracy were all fascinating. Together with the strong characters, friendship, the element of storytelling and the fantasy aspects of the novel make this a wonderful, wonderful book! It's filled with action and suspense and a strong female character that willl make any reader cheer. Very highly recommended!
Written by Michelle Fluttering Butterflies at 09:54