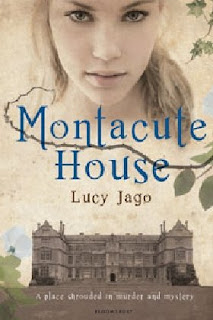 At first a boy’s body is discovered, then John, Cess’s best friend, disappears . . . What is the mystery behind these sinister events?

Cess works caring for the chickens at Montacute House but on her thirteenth birthday everything changes. She finds a precious locket hidden in the chicken coop and is convinced someone has placed it there for her to find. But the day is overshadowed by fear as a boy’s body is found by the river, and then John disappears. Cess is determined to find him but is soon embroiled in a plot that threatens her world and forces her to draw on powers she never knew she possessed, powers that will place her life in danger if they are discovered by the villagers. Witchcraft, politics and religious ambition combine in this gripping and wonderfully realised novel set in the Somerset of the 1500s.

I've never been a massive fan of historical fiction, but after reading books like Montacute House by Lucy Jago, I'm never quite sure why that is because this book was fun and different and very exciting to read. The historical detail is present but never over-bearing and I was drawn into the plot and the characters quickly and was really pleasantly surprised by this book.

Montacute House introduces us to Cess, a thirteen year old servant girl who works on this big estate house in Somerset during the 1500s. On the day of her birthday, Cess finds a valuable locket in one of the chicken's nests whose job it is for her to look after. But it isn't the only unusual event that happens that day, as a boy's body has been found, beaten and is apparently the victim of disease and witchcraft is ultimately blamed. The town also begins stirring after the estranged-heir to Montacute House arrives and when Cess's best friend, William, disappears, Cess must gather together all the pieces of this mystery and figure out how they fit together.

To do this, Cess relies on two very surprising sources - the first, her old friend, Edith, who was recently accused of witchcraft and chased out of town; the second, a village boy she's only just met. Together the three put themselves at risk as they uncover this deadly secret that could have very far-reaching consequences.

I really liked Cess's character - she's a loyal friend and she stands up for both William and Edith despite the harm that it might cause her. When William goes missing, there isn't much that Cess won't do in order to find and save him. While I did find Cess's growing romantic interest in the village boy Jasper hard to believe, I felt like everything else kept me interested in the story. I became quite surprised at how much of the story involved religion, both of the conflict between Catholics and Protestants as well as the persecution of witchcraft. All and all, an enjoyable read!

Want to know more? Visit Lucy Jago's website or watch this video on YouTube!
Written by Michelle Fluttering Butterflies at 09:23