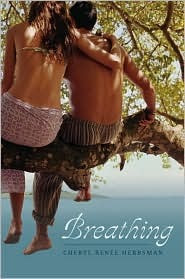 Savannah would be happy to spend the summer in her coastal Carolina town working at the library and lying in a hammock reading her beloved romance novels. But then she meets Jackson. Once they lock eyes, she’s convinced he’s the one—her true love, her soul mate, a boy different from all the rest. And at first it looks like Savannah is right. Jackson abides by her mama’s strict rules, and stays by her side during a hospitalization for severe asthma, which Savannah becomes convinced is only improving because Jackson is there. But when he’s called away to help his family—and seems uncertain about returning—Savannah has to learn to breathe on her own, both literally and figuratively.

Awww. What an absolutely sweet book Breathing by Cheryl Renee Herbsman is. Right from the very first page, I was absolutely hooked. This book instantly put the smile on my face and made my heart happy.

This book felt like an absolute breath of fresh air with its young love and its Southerness. I know that I complain sometimes that love in YA shouldn't be hugely dramatic and overemotional and especially that it shouldn't necessarily be forever. But then there's books like Breathing where it's all I desperately want is for the two lovebirds to stick it out and make things work already. And Breathing isn't any of those other things. It feels very believeable and possible and I love that. I love that this story seems to be taken from the author's own experience with her husband and it seems all that much sweeter.

Our main character is Savannah. She likes reading romance novels and works parttime in her local library. She's all set to continue in this routine until she meets Jackson on the beach and everything changes. Without saying much about it, they both recognise this almost magnetic pull that brings these two teenagers together. After an intense experience where lives are saved, these two start a thing. One that is not easily hidden.

And almost before this relationship really begins, there's already limitations placed on it from Savannah's overly protective mother. Savannah's mother gives her very strict rules to abide in an attempt to dissuade Savannah and Jackson from dating, to discourage anything serious. But as Savannah suffers from some quite severe asthma attacks, things start heading towards serious fairly quickly between the two.

And whilst Breathing does seem to promote this forever kind of love between people incredibly young, it is also encouraging behaviour that will lead both Savannah and Jackson to be independent people who don't give up on their dreams or each other. And I loved it for that. A really sweet, summery and romantic book.
Written by Michelle Fluttering Butterflies at 09:53