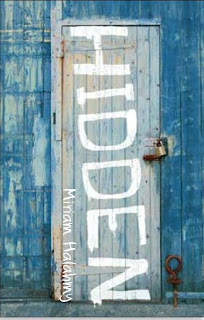 I really loved Hidden by Miriam Halahmy! I won my copy of the book in a Twitter competition, and I'm really glad for it as well. It would have been a shame to have missed out on this thought-provoking and topical book that explores really important themes such as racism, immigration and judging by appearances.

When I first recieved Hidden, and saw that it is set on Hayling Island, the first thing I did was to look Hayling Island up on Google maps as I'd never heard of the island before. It seems like a really great setting for this book (as well as the next two books planned by Miriam Halahmy) as the location certainly makes sense in terms of finding a washed-up asylum seeker!

I admit, when I first started this book I was shocked into silence after the main character, 14 year old Alix, very early on refers to a classmate, Samir, as a 'suicide bomber' - But to be honest, that is something that Hidden does so well - first addressing and then challenging this type of racist assumptions. I thought it very realistic and believeable the thoughts and feelings of Alix towards Samir and later towards Mohammed.

When Alix and Samir rescue a man out of the sea, things really begin to shift for Alix. Already she's struggling at home as her mother relies Alix a lot more after Alex's mother breaks her leg and also Alix is sort of estranged from her father. But still, there's no way she could abandon the poor man after all the troubles he's been through - being beaten, abandoned and nearly drowned. Alix finds shelter for him, gives him food and clothes and by helping him, she begins to have a better understanding of asylum seekers, refugees and immigrants.

Though she is being taught about immigration at school, there are quite a few people in her class and in her community who have intolerant and racist viewpoints. Alix, who has a growing awareness of these topics, must make up her own mind about how she feels as well as decide how she can help, if at all. There's this struggle within her that shies away from speaking up or causing trouble by calling people out on their racist behaviour.

Hidden is a very different book to any I've read in awhile. While sharing information, it never feels preachy or heavy-handed in any messages. So many people will judge others based on their appearances, Alix included, and it was wonderful to challenge these assumptions so wonderfully - with racial assumptions like with Samir and Mohammed, but also assumptions based on appearances or people's associations. I'm very much looking forward to the next book in the series by Miriam Halahmy, which I believe focuses on my favourite character, Lindy - the sister of the local bully.

Hidden is a really wonderful book, one I can highly recommend!
Written by Michelle Fluttering Butterflies at 09:05