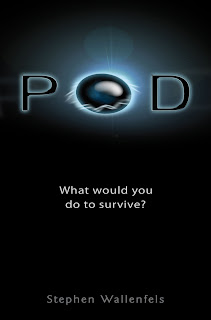 I'm not a big reader of science-fiction, but I've been really lucky that every time in the past year that I've picked up a scifi novel, I've really enjoyed it. Once I started POD by Stephen Wallenfels, I was instantly pulled into this scary story of two different young people desperately trying to hold on when everything falls apart. An alien invasion changes everything and it left me constantly wondering what I would do if I were in Megs or Josh's place. POD is a story of survival and hope and of humanity. And I'm really glad I read it.

I found the dual-narrative of POD to be quite interesting. In most stories with such a split perspective I could see some overlap or a clear reason for telling the story from a different point of view. There isn't such a clear or obvious reason for the story to be told in this way right from the start, but both stories are incredibly interesting and very pacey and the break in one story line to jump to other sometimes made me really excited and it wrenched up my levels of anticipation to get back to that character.

POD is told in part by Josh, a 15 year old boy who is at home with his father on the morning that the alien invasion occurs. Huge black spaceships appear overhead and zap any people who might leave their homes. Josh finds it very difficult to come to terms with this new intrusion into his life and also struggles with his attitude towards his father who has OCD tendencies. Together they come to this uneasy truce, but are also able to have a better understanding of the other. They talk about some very serious things - food rationing and how to take care of their dog and what happens next.

Whereas, not far away, Megs has been on a road trip with her mother and when the PODs (which stand for Pearls of Death) show up, she's alone in a car in a multi-storey car park waiting for her mother to come back. At 12, Megs has already had some difficult life experience and she really needs her mother. Instead of curling up somewhere and giving up when it becomes clear that she has no food or water or any protection, especially from the armed thugs who have taken control of the hotel next to the car park, Megs really shows her courage and strength and resourcefulness by scavenging for food and for keeping herself alive in such a desperate and grim time.

I really loved this one. I loved the development in Josh's relationship with his dad and seeing the way in which both Josh and Megs learn to cope with such drastic and massive changes. Megs is such a wonderful, strong character. I really couldn't imagine having the ability to pull myself together like she did, taking it all one day at a time.

POD is a really exciting book, and while it doesn't give very much information at all about the aliens or their purpose or reasons for being, I didn't feel that it mattered at all. This book seems more about the capacity for humanity and survival than anything else. I recommend it. 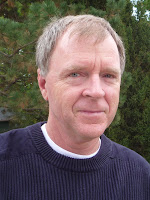 I really loved my experience of reading POD by Stephen Wallenfels, so I was thrilled when I was offered the chance to be part of the blog tour and host a guest post from the author. Here now is a Stephen Wallenfels who discusses the process of writing POD and how everything comes together after one very important thing... If you'd like to know more about POD, please do visit this very cool website. Over to you Stephen...

If you asked me to squeeze everything I know about the challenges of writing into a single, one-syllable word, that’s it. In my writing universe VOICE is the wind that turns the wheel that pumps the lever that spins the gears that grinds out the finished product. In this case, that product is POD.

In the order of how things happen, sometimes it’s the idea, sometime it is voice. POD was an idea that emerged from a dreamscape. But voice wasn’t far behind. After thinking about the idea for a few days, I sat down to see who would tell me the story. The first words I heard were: The screeching wakes me. (Actually I wrote that sentence about twenty times). The more I listened, the more details that emerged. Okay, he’s a boy. A teenager. Sarcastic, kind of whiny. Impulsive, intense, lazy at times, but ultimately a scared kid with his heart in the right place.

Once I have the voice down, and it takes a couple of chapters to get it right, then I start considering the other stuff, like plot, structure, secondary characters, subplots, outlines, theme—and the pulse that drives the voice: tension. POD started out as a short story, The Pearls of Death. With some urging from a friend I decided to add a second protagonist in a different setting, alternate the chapters, and see if it will be enough to make a book. So I sat down to listen, and hoped the voice would be interesting enough to engage me for the months it would take to finish this project. Luckily it was Megs that showed up. I had a blast listening to her, and she was a welcome relief from Josh—who, like I said, had an annoying tendency to whine. Of the two, Josh was the most challenging (there a pieces of me and my son and a high school friend in him), while Megs was just flat-out fun. And just to be clear, my son is not the sarcastic whiner.

So I have the voice. Then what? All the other things have to fall in place, including squeezing the time to write what I hear. Since I’ve studied the craft of screenwriting (which I happen to enjoy more than writing novels) I have a tendency to break my writing up into scenes. The only absolutes I make sure are present in each scene are what I call the 3 C’s: character, conflict and change. Sometimes these scenes come easy, sometimes it’s like passing a kidney stone.

Once I reach those blessed two words: The End (or Fade Out if it’s a screenplay), then the next process begins—finding someone to think it’s good enough to publish. That’s pretty much like finding the Holy Grail. An important step in that journey is to find some very good and patient readers that give you honest opinions. I rely on my wife, my son (now in his twenties) my writing group and my agent. They are all helping me churn out my next major project—the continuing adventures of Josh and Megs. Lucky for me, I enjoy their company and they enjoy mine (I think).

Oh, and one final stage in this process. Josh and Megs say that POD would make a great movie. They want to know what you think.
Written by Michelle Fluttering Butterflies at 08:35