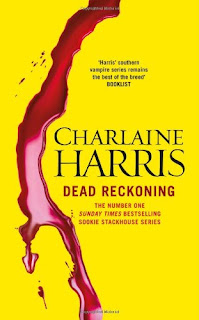 I've been a fan of the Sookie Stackhouse books by Charlaine Harris for awhile now. I think I'll always be a little excited for new books about Sookie to be published, even after the mediocre previous book, Dead in the Family. I found Dead Reckoning by Charlaine Harris, the 11th in the Sookie Stackhouse series, to be a bit more exciting. Yet more vampire drama, fairies and shape-shifters in the latest installment of this fun paranormal series.

Dead Reckoning begins with Sookie being present at Merlotte's when it is attacked by a firebomb. At the heart of the book is solving this mystery of who could be behind the attack. But at the same time as trying to work out the culprits behind the firebombing, Sookie also has to deal with lover, Eric Northman being hugely absent and him being so focused on vampire politics and his second-in-command, Pam, that it really puts a bit of strain on Sookie and Eric's relationship, especially when it emerges as to how much Sookie is involved in the vampore politics than she was made aware of previously.

It must be hard to maintain the same level of awesome throughout such a long series, but I do love that more information and backstory regarding Sookie's personal history is revealed in Dead Reckoning. While I'm not totally enamoured with the fairy aspect of the books, it was quite interesting to learn more about the fairies, their world and their interactions with Sookie's relatives.

The action in Dead Reckoning is really quite good. Lots of blood and gore, but it also has more Bubba, which is always a plus. Lots of characters from previous books who show up at different times and Sookie realises she has more enemies than she'd bargained for. I think Sookie's starting to really question the relationships in her life and how out of control it is gotten with the arrival and her entanglements with so many different paranormal creatures.

I don't know. While I didn't absolutely love this book, I could see some of the elements that I used to love about the series in Dead Reckoning. There's still some problems with repition and mundane details of Sookie's life that I could do without as well as some rather ... TMI moments, but I'm a fan of the series and will continue to hang in there with Charlaine Harris as she hurtles towards the end of the Sookie Stackhouse series.
Written by Michelle Fluttering Butterflies at 08:16