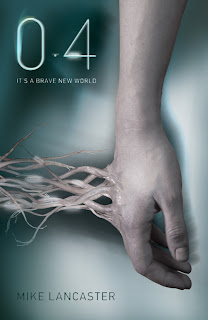 0.4 by Mike Lancaster is like no other book I've read. I had absolutely no idea what was going to happen as I started and even up to halfway through, I was still guessing wildly (and incorrectly!) at the mystery that surrounds this book. There was such a great and creepy atmosphere, I found myself being utterly terrified as this story unfolds. Such an interesting story, I was gripped all the way through.

It has a bit of an unsual structure to the novel, as the book is the written account of what has been found on some cassettes that have been found many years into the future. It is separated by some narrative by the lifeforms that populate the future explaining some of the unusual behaviours and dialogue that is mentioned on the tapes.

Our narrator is teenager Kyle Straker, who begins to describe a fairly typical day in his small town in England. There is a community talent show and for a hypnotism act by a friend, Kyle volunteers. When Kyle and the other three volunteers wake up from this, their entire world has changed. People are acting strangely, technology no longer works, it seems as though Kyle and his three companions are in danger and struggle against many difficulties in order to find out the truth.

This is a very creepy and strange story. I don't read a lot of science-fiction, so I had no idea what to expect. Each new twist and turn in the story was surprising for me and I found myself a little shocked at where the story ended up. It's quite short, this book and the way in which it is written made it near impossible for me to put the book down until it was finished. Chilling though it is, it's also incredibly engrossing and I'm utterly excited to hear of a sequel. Let it be published soon! And bring on more YA sci-fi like this!
Written by Michelle Fluttering Butterflies at 08:28