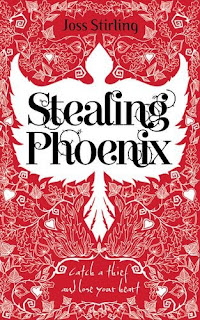 It wasn't so long ago that I read the first book in this series, Finding Sky. I really adored Finding Sky so when I got an email asking if I'd like to read Stealing Phoenix by Joss Stirling, I didn't hesitate! I'm usually a little wary of books in the same series in which each book has a different narrator, but there's something about these books which makes me excited and I'm able to ignore most of my usual worries.

These books by Joss Stirling focus on people called Savants, people with unusual abilities such as telekinesis and mind-reading. Each Savant has their own special gifts and each Savant has been paired to another, called Soul Finders. This series focuses on the Benedict brothers, and each of their Soul Finders. Soul finders are very difficult to find, but worth taking on a dangerous mob of criminals when it does happen! I absolutely fell in love with Zed and Sky from Finding Sky and I thought it would be hard to live up to that relationship. But I think Phee and Yves' is right up there too. I really can't wait to get my next fix of the Benedict brothers!

I love that this story takes place in England, and a lot of the relationship-building between Phoenix and Yves happens in London, as does some of the interactions between the Benedicts and the baddies. I'll get to that in just a minute though, I just wanted to mention how much it gives me a little thrill when I can recognise the place settings in a book!

Our main character here is Phoenix, a teenage girl who has not lived a normal life. Instead, she has grown up in this band of thieves, that is run by this shady man called the Seer. The Seer gives Phoenix a special job, to steal from a particular tourist... one Yves Benedict, who is in London on some brainiac seminar.

I love how very different Yves and Phoenix are - there's a huge gap in their levels of education and economic class, they have incredibly different backgrounds and families, but of course that connection is there. Obviously, Phee has some major issues to overcome, but Yves is incredibly sweet and patient. I do love a nerdy love interest. Plus we get to see more of the Benedict family, which now includes Sky, to see how they're all getting on.

I'm so excited with this series. I will always eagerly anticipate the next novel for more of the romance, more Benedict brothers, and more awesome special powers!
Written by Michelle Fluttering Butterflies at 09:15