Books that make me want to travel... to New Orleans

I love the idea of travelling. I don't think I've done very much of it in my nearly 30 years, but I'd like to. I sit and daydream all of the time about the different places I'd like to see and what I'd do there. It's a fun pasttime. And something that really helps is when I read about a place and the author describes it in such a way that makes me absolutely PINE to visit. And so my 'Books that make me want to travel' feature was born. 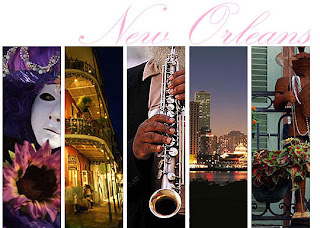 Today I'd like to talk about a few books I've read recently which have included, even briefly, New Orleans. I love books about the South of the United States, I really do. I think it's a place that I'd love to visit, even just for the food some time. But after Hurricane Katrina it just felt like whenever I thought of New Orleans, I thought of sadness and the huge destruction that it caused.

And then, I don't know if it's a coincidence or not, but three books recently mentioned New Orleans and it got me feeling excited about NOLA all over again. To visit, not just because of Mardi Gras, but for the music and the history and the food.

The Iron Queen by Julie Kagawa - Obviously The Iron Fey series of books takes place mostly in a fairy realm away from the world we all live in. But in The Iron Queen, which I read recently, there was this really interesting scene early on in the book. In order for Meghan to barter for something she needs back, she had to locate an object of power, this token. To do this, she and Prince Ash journey into a cemetery in New Orleans and Prince Ash tells Meghan of this lovely and sad story of two lovers.

It wasn't much about New Orleans, not a great deal of time was spent there, but the story really stuck in my mind. It was enough.

Going Bovine by Libba Bray - Going Bovine is one of my favourite books that I've read in recent years. It's so weird and emotional and heart-felt that it will forever stay in my mind. I really, truly adore this book. The characters and the story and some of things that are covered in this book were just done so well. It's this really bizarre road trip through America on a quest that is both strange and wonderful. And there's quite a bit in the book about music, particularly jazz music, which of course, New Orleans is sort of known for. There's a whole sequence in the book about our main character, Cameron, in a jazz club in New Orleans and it really is unforgettable.

Darkness Becomes Her by Kelly Keaton - I really was surprised by this book. I had no idea what it would be about when I first started, but I jumped in anyway and it was such an interesting and different story combining both paranormal creatures such as shape-shifters and vampires together with Greek mythology. It was such a fun book to read. I've recently read the sequel and loved that as well. But what I also think is great about this series is how it encorporates New Orleans into the story. Everything takes place in a fictionalised version of New Orleans called New 2. After the mass destruction of Hurricane Katrina, a private group of individuals (the heads of 9 witches, vampires and shape-shifter families) buy the land around New Orleans and the area becomes a haven for the weird and paranormal.

I really enjoyed reading of the different quarters of New Orleans and how our main character, Ari, wanders through them and learns more about this city she's now living in.

Have you read any books recently that involve New Orleans? Or the South? that made you want to travel?
Written by Michelle Fluttering Butterflies at 09:35