Blog tour for The Book of Blood and Shadow by Robin Wasserman:

I am extremely happy today to have Robin Wasserman on my blog for her blog tour for the fabulous The Book of Blood and Shadow! This book is incredible, and I was really blown away by it! Robin is here today discussing something very relevant and close to my heart, New Year's resolutions!
To find out more about Robin or The Book of Blood and Shadow, please do visit the following websites: 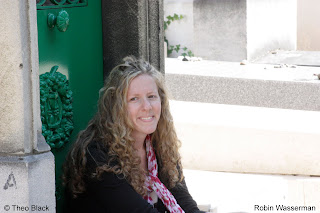 New Year's Resolutions and January Blues
by Robin Wasserman
I love making lists, I love making plans, and I love judging people, most of all myself. So as you can imagine, I’ve always been big on New Year’s Resolutions. In fact, for the last few years, I’ve been making them not once, but twice a year. (Thanks, Jewish New Year!) Unfortunately, like the rest of the world, I’m a lot better at making lists than I am at following them. Some failed resolutions from the last couple decades:

-I will not bite my nails
-I will join a gym
-I will go to the gym
-I will stop yelling at my mother
-I will go beyond my comfort zone (this from the period when I decided to try generic, personality-improving resolutions rather than concrete actions – it didn’t work any better)
-I will get a boyfriend (this from pretty much every year of junior high and high school and probably elementary school, though I think back then I didn’t want a boyfriend so much as I wanted Robbie W to ask me to dance)
-I will write every day
-I will stop being a picky eater
-I will stop eating so many cookies (I don’t think this one lasted past January 1)

I don’t think of myself as someone completely lacking in willpower (well, except when it comes to going to the gym), but slap a self-improving suggestion on a piece of paper and call it a resolution, and I am apparently powerless to resist the temptation to ignore it entirely.

Which is why I finally came up with a new plan. Call it a resolution on resolutions.

Last year, for the first New Year’s Eve since toddler-hood, I made no resolutions whatsoever. Instead, I made a different kind of list. A list of things I wanted to achieve and things (even things that were completely out of my control) I wanted to happen. I made a wish list for life, and I forced myself to write down everything that I really wanted, even the things that seemed too ludicrous ask for, the things it seemed embarrassing to even admit that I imagined as possibilities. I forced myself to think big.

Now, writing things down and hoping really, really hard isn’t enough to make things happen, and even the balmy glow of New Year’s Day couldn’t make me believe otherwise. But there’s something to be said for forcing yourself to admit to the things you want the most—and there’s something to be said for writing it all down in list format so that over the course of the year you can remind yourself what you’re aiming for…and how happy and grateful you should be when you get it. (Bonus, you get to avoid feeling like a complete failure when you don’t measure up.)

I’ve always found that one of the hardest things about being a writer is having no single, obvious track to follow—no straightforward marker of ultimate success. There are so many types of career to have, so many ways for a book to succeed (or fail), so many people so publicly doing exactly the same thing you are and seemingly (because it always seems this way) doing it better, that it’s almost impossible not to be constantly moving your goalposts. To think: All I want is to get published. Only to get published and realize: All I want is to get good reviews. Or get a book tour. Or be a bestseller. Or win an award. Or win a better award. No one can do it all, but it’s hard not to want to, and I suspect that even JK Rowling still spends an occasional night tossing and turning and wondering why her career going as well as...well, bad example, maybe. But I’d bet that every other author in the world is jealous of someone, and a lot of us probably spend more time worrying about what we don’t have than being proud of what we do.

And who knows—maybe I’ll even choose to stop biting my nails. It’s a new year: Anything can happen. 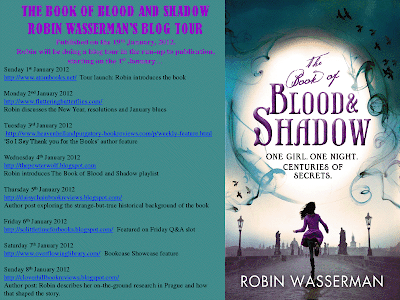 The Book of Blood and Shadow by Robin Wasserman is published by Atom as a paperback original on the 19th of January, £6.99.
Written by Michelle Fluttering Butterflies at 08:47