Welcome to another edition of In My Mailbox. IMM is a weekly meme hosted by Kristi of The Story Siren in which bloggers get the chance to share with their readers the books that have recently come into their possession. I really love this meme and I look forward to seeing all my favourite blogger's books each week. Thank you to Kristi for hosting something that is such fun!

Here are the books that I acquired this week...

Fated by Sarah Alderson - What happens when you discover you aren't who you thought you were? And that the person you love is the person who will betray you? If your fate is already determined, can you fight it?

When Evie Tremain discovers that she’s the last in a long line of Demon slayers and that she’s being hunted by an elite band of assassins –Shapeshifters, Vampires and Mixen demons amongst them – she knows she can’t run. They’ll find her wherever she goes. Instead she must learn to stand and fight.

But when the half-human, half-Shadow Warrior Lucas Gray - is sent to spy on Evie and then ordered to kill her before she can fulfil a dangerous prophecy, their fates become inextricably linked. The war that has raged for one thousand years between humans and demons is about to reach a devastating and inevitable conclusion. Either one or both of them will die before this war ends.

If your life becomes bound to another’s, what will it take to sever it?

One of my favourite things about last week's blogger brunch was meeting one of my favourite book bloggers, Kirsty from The Overflowing Library. Not least because she brought me this fab new book by Sarah Alderson! I LOVED Hunting Lila and I'm hoping to love Fated just as much!

Marked as special at an early age, Jacinda knows her every move is watched. But she longs for freedom to make her own choices. When she breaks the most sacred tenet among her kind, she nearly pays with her life. Until a beautiful stranger saves her. A stranger who was sent to hunt those like her. For Jacinda is a draki—a descendant of dragons whose greatest defense is her secret ability to shift into human form.

Forced to flee into the mortal world with her family, Jacinda struggles to adapt to her new surroundings. The only bright light is Will. Gorgeous, elusive Will who stirs her inner draki to life. Although she is irresistibly drawn to him, Jacinda knows Will's dark secret: He and his family are hunters. She should avoid him at all costs. But her inner draki is slowly slipping away—if it dies she will be left as a human forever. She'll do anything to prevent that. Even if it means getting closer to her most dangerous enemy.

Mythical powers and breathtaking romance ignite in this story of a girl who defies all expectations and whose love crosses an ancient divide.

Kirsty also gave me this book. Dragons. I'm really curious to see how this one works out!

Dark Inside by Jeyn Roberts - Four teenagers on the same road in a world gone mad. Struggling to survive, clinging on to love and meaning wherever it can be found. THE DARK INSIDE is a stunning, cinematic thriller: 28 DAYS LATER meets THE ROAD.

Since mankind began, civilizations have always fallen: the Romans, the Greeks, the Aztecs…. Now it’s our turn.

Huge earthquakes rock the world. Cities are destroyed. But something even worse is happening. An ancient evil has been unleashed, hooking on to weakness, turning the unwary into hunters, killers, crazies.

Mason: His mother is dying after a terrible car accident. As he endures a last vigil at her hospital bed, his school is bombed and razed to the ground. Everyone he knows is killed.

Aries: A school bus, an aftershock and a crash. Pulled out of the wreckage by a mysterious stranger, she’s about to discover a world changed forever.

Clementine: An emergency meeting at the town hall that descends into murderous chaos. Outside the rest of their community encircle with weapons. How can those you trust turn into savage strangers?

Michael: A brutal road rage incident. When the police arrive on the scene they gun down the guilty and turn on the by-standing crowd. Where do you go for justice when even the lawmakers have turned bad?

I'd left a comment on Sarah's blog (Feeling Fictional) saying how much I wanted to read this book, so when we both ended up at Random House last weekend, she brought it along for me. Isn't she sweet?

The Wood Queen by Karen Mahoney - Donna Underwood is in deep trouble.An ancient alchemical order is holding her accountable for destroying the last precious drops of the elixar of life. Never mind the fact that Donna was acting to free her friend, Navin, from the dangerous clutches of the Wood Queen at the time. But what the alchemists have in store is nothing compared to the wrath of the fey. The Wood Queen has been tricked and Donna must pay. Get ready for all hell - quite literally - to break loose...

Yay! The sequel to The Iron Witch. Navin was my favourite character in this series and I'm looking forward to returning to this story and to these characters! 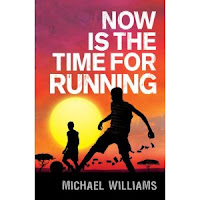 Now Is The Time For Running by Michael Williams - Just down the road from their families, Deo and his friends play soccer in the dusty fields of Zimbabwe, cheered on by Deo's older brother, Innocent. It is a day like any other . . . until the soldiers arrive and Deo and Innocent are forced to run for their lives, fleeing the wreckage of their village for the distant promise of safe haven. Along the way, they face the prejudice and poverty that await refugees everywhere, and must rely on the kindness of people they meet to make it through. But when tragedy strikes, Deo's love of soccer is all he has left. Can he use that gift to find hope once more?

Relevant, timely, and accessibly written, Now Is the Time For Running is a staggering story of survival that follows Deo and his mentally handicapped older brother on a transformative journey that will stick with readers long after the last page.

This book was picked up at the fab Random House blogger's brunch last weekend. It sounds like it'll be interesting to read, but also a little sad and beautiful. I'm very much looking forward to this one.

Code Name Verity by Elizabeth Wein - "Two young women become unlikely best friends during WWII, until one is captured by the Gestapo.

Only in wartime could a stalwart lass from Manchester rub shoulders with a Scottish aristocrat, one a pilot, the other a special operations executive. Yet whenever their paths cross, they complement each other perfectly and before long become devoted to each other.

But then a vital mission goes wrong, and one of the friends has to bail out of a faulty plane over France. She is captured by the Gestapo and becomes a prisoner of war. The story begins in "Verity's" own words, as she writes her account for her captors. Truth or lies? Honour or betrayal? Everything they've ever believed in is put to the test..."


Code Name Verityis the story of two young women from totally different backgrounds who are thrown together during World War II.

Elizabeth Wein is a member of the Ninety-Nines, the International Organization of Women Pilots. She was awarded the Scottish Aero Club's Watson Cup for best student pilot in 2003 and it was her love of flying that partly inspired the idea for Code Name Verity.

This one sounds very interesting! I have a fascination with WWII stories and I love the idea of these two strong women and their friendship.

Oliver Twisted by JD Sharpe and Charles Dickens - “FLESH, the woe-begotten moaned at Oliver, baring teeth which were ragged and black.

I'll be taking a quick break during Love month in order to sneak in a review of this book as well as a guest post on the Oliver Twisted blog tour! I'm really quite looking forward to it :)

Epic Fail by Claire LaZebnik - Will Elise’s love life be an epic win or an epic fail?

At Coral Tree Prep in Los Angeles, who your parents are can make or break you. Case in point:

As the son of Hollywood royalty, Derek Edwards is pretty much prince of the school—not that he deigns to acknowledge many of his loyal subjects.

As the daughter of the new principal, Elise Benton isn’t exactly on everyone’s must-sit-next-to-at-lunch list.

When Elise’s beautiful sister catches the eye of the prince’s best friend, Elise gets to spend a lot of time with Derek, making her the envy of every girl on campus. Except she refuses to fall for any of his rare smiles and instead warms up to his enemy, the surprisingly charming social outcast Webster Grant. But in this hilarious tale of fitting in and flirting, not all snubs are undeserved, not all celebrity brats are bratty, and pride and prejudice can get in the way of true love for only so long.

This is a last minute addition to my Love month pile. It's another modern YA retelling of Pride and Prejudice. I think it'll fun and quick to read :)
-----------------------------
So that's it for me this week. As this is the last weekend before February starts, I will not be doing another In My Mailbox until March. All of February will be a celebration of romance and relationships as I kick off my now annual Love Month proceedings. Come and join the fun! There'll be lots of reviews, posts and giveaways.
Have you read any of these books? Suggestions for where to start?

Written by Michelle Fluttering Butterflies at 08:37

Email ThisBlogThis!Share to TwitterShare to FacebookShare to Pinterest
Labels: Books, imm, YA