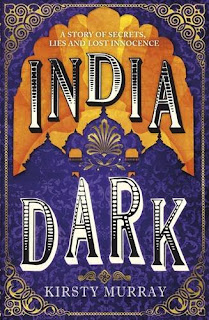 I don't know what it is, but something about India really intrigues me. Which is partially why I was excited to read India Dark by Kirsty Murray, despite it being an historical novel. But of course, the other part of it (pretty cover aside!) is the fascinating premise of it.

Based on a true story, India Dark tells a fictionalised story of a children's travelling theatre group in 1910, which went on strike while touring India and refused to go any further until the manager is removed. What I was most curious about is that this happened at all. It's a large group of children, varying in age, whose parents had signed over custodial rights in order for their children to work in this theatre group for two years. I find that incredible! From a parent's perspective, I find it unimaginable - with worries about safety and education and living and travelling conditions. But of course, as a child, I'd probably only be thinking of the adventure of it all. The excitement of seeing the world and performing in front of mixed audiences and the freedom that would go along with it.

And at first, that's what this story seemed to be about. Told in a dual-perspective by two of the girls in the travelling theatre, they tell a story of leaving their homes in Australia, encountering different social customs in Southeast Asia. These two girls, Poesy and Tilly, tell of the lack of education the children receive, the attention that the girls get after performances. It tells of costumes and set changes and the different songs and dances that are performed. There's a lot of bickering and arguments between groups of people, of course. But things mostly run smoothly.

But then things start becoming a little more dire. As news of poor showings and ticket sales occur, it soon becomes evident that this group, once on their way to America, will now detour throughout Asia and spend a great deal of time in India instead. And while a lot of the story is a straightforward account of events, it also brings up the stifling feelings of the older girls who want more control and freedom to choose which songs to sing and to roam about more freely.

When more and more conflict arises from friendships with some of the male fans of the showand when secrets and betrayals start coming between the friendships of those within the group and when more of the girls start rebelling against their minders, everything seems to come apart and snowball in terms of problems and conflict.

I really enjoyed this story, seeing the events unfold from two very different narrators with different ideas and priorities and viewpoints. While I did find the story to be a little bit long, I really enjoyed the making and unravelling of friendships in India Dark. I loved the detail of the performances, especially Charlie's interest in magic, and also how well Kirsty Murray showed that the truth can be very complicated and have many different sides and perspectives.
Written by Michelle Fluttering Butterflies at 08:36