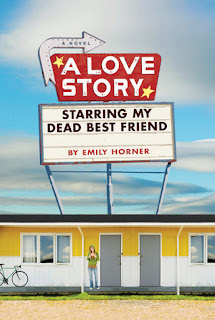 Oh I did adore A Love Story Starring My Dead Best Friend by Emily Horner, I really did. I had tears streaming down my face on several occasions when I finished this book I heaved a big happy sigh and wanted to read it all over again.

It was another blogger who brought this book to my attention and the review I read of it was lovely, but I'd mostly forgotten any of the detail by the time I got around to reading this. And that was brilliant, I loved going into this book with so little knowledge and discovering things like Totally Sweet Ninja Death Squad on my own. I really wish there were more YA stories that deal with sexuality in the same sensitive and understanding way that Emily Horner has done. This a truly beautiful book.

A Love Story Starring My Dead Best Friend is a book about love and friendship and finding that place where you belong. It's a book about grief and forgiveness and moving on. In a lot of ways, I realy wanted this book to be longer so that I could spend more time in these character's lives, but in other ways, it's perfect just the way it is. It's told in two parts, Then and Now, and the story alternates between the two.

During Then, our main character and narrator, Cass is on a cross-country road trip. Her best friend Julia has just recently died but Cass has decided to honour the plans Cass and Julia had made to travel to California during the summer holidays. They had planned on taking Julia's car, but as Cass has neither license nor car, she's doing it on her bicycle. (!!) Cycling cross-country gives Cass plenty of time to think about her relationship with Julia and how Cass felt about her. I think it's an incredible goal, to cycle across the country, on your own. It's definitely an unusual summer holiday activity. But I love the sense of adventure and how much it helps Cass to discover things about herself.

Julia was very wrapped up in drama and had a circle of drama-nerd friends. And Cass didn't feel like she belonged in that circle without Julia to connect them. So when Julia's drama friends decide to perform the play that Julia was working on before she died, Totally Sweet Ninja Death Squad, and casts in the main lead the person who once bullied Cass and spread rumours about her, Cass obviously feels very upset and takes off. Even though Julia is dead as this story begins, I loved seeing glimpses of who she is, through Cass' memories and through Totally Sweet Ninja Death Squad, which seems to be a tribute to the relationships and friendships that Julia had.

During the Now, Cass has returned from her road trip, and has decided there's nothing to do but suck it up and work on this play, and hope she doesn't run into Heather much. But a lot has changed for both Cass and Heather and maybe they are starting to actually like each other...

This book is so wonderful. I loved Cass as a character. She's so mixed up and confused, with her own sexuality, with her feelings of grief towards Julia's death, where she fits in with this group of people she has nothing in common with. I love that it takes Cass so long to work out her own feelings, I think that's something that a lot of people, myself included, can relate to. Not everyone wakes up one morning and knows for certain who they are, what they believe, who they love. And while everyone had called Cass a lesbian for years (since Heather called her a 'dyke' in front of everyone) it takes Cass a lot longer to realise what is true and what isn't.

My heart absolutely broke at how much the loss of a friend has affected this group of characters and how they pull together as friends. Cass and Heather's relationship was also wonderful. It's such a fragile thing at the beginning with so much bad history between them, but I love their journey from enemies to acquaintances to friends.

An absolute wonderful book, A Love Starring My Dead Best Friend will remain with me for a long time to come! It's funny and sad and beautiful and sweet, all at the same time. I cannot recommend this book enough.

Written by Michelle Fluttering Butterflies at 09:23