REVIEW: One Night That Changes Everything by Lauren Barnholdt 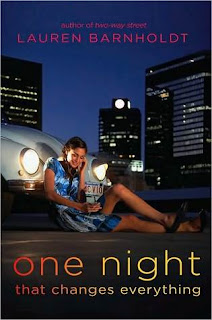 I hadn't really very much about One Night That Changes Everything by Lauren Barnholdt before I read it. I picked it up mostly on the strength of reading one of the author's previous novels, Two-Way Street. I was hoping to read another tension-filled but fun romance, and that is definitely what I ended up with whilst reading this book. I shall certainly look out for more books by Lauren Barnholdt!

As the title suggest, everything happens over the period of one eventful night. Our main character, Eliza, thought she was going to be moving to another town two years ago. She got all ready for it and decided that in this other place, she'd be the person she always wanted to be - someone who was more confident about boys and herself and someone who wasn't so shy. But the move never went through, and she never made any of those changes.

Still, once she'd started making a list in her journal, she didn't stop - of all the things that she was afraid of, silly things like asking a boy to dance to more serious things like telling the people she's closest to the secrets that have been eating her up for ages. Eliza never exected anyone to see this list, especially not her ex-boyfriend Cooper. Her ex-boyfriend Cooper, who acted terribly towards Eliza and to whom Eliza did terrible things in retalliation. So, on this huge night, everything changes - because now Cooper and his friends have Eliza's journal and are blackmailing her into doing the things she's most afraid of, otherwise they'll make her very personal fears and secrets public.

I thought it was interesting idea for a story, and while at times I did think that things were a little far-fetched, I was always incredibly entertained and invested in Eliza and Cooper's characters and relationship. I could really relate to a lot of Eliza's fears, as I was as a teenager (and in some cases, still as an adult!) just as shy and not very confident about my body or around boys. If I'd had the idea of writing down all the things I was afraid of, it would be a very long list.

I could picture myself in Eliza's position, being forced into doing these scary things and worse, doing them whilst your ex is watching would be very uncomfortable and humiliating. It was nice to see Eliza gain some self-confidence throughout the night as well as to unravel what was right and also wrong about Eliza and Cooper's relationship. Very fun story, one I'm glad to have read!