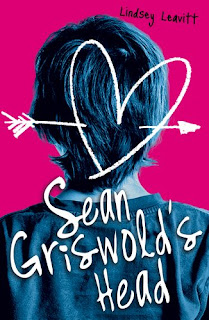 Oh I'm so in love with Sean Griswold's Head by Lindsey Leavitt! It's such a sweet and romantic story that manages to be both adorable, laugh out loud funny and also quite sad. I love books that can pull off such a mixture of emotions like this book did.

Payton Gritas is a typical 15 year old girl. She's pretty straight laced though - good grades in school, a penchant for organising things. But after finding out that her father is has multiple sclerosis and that her entire family has been lying to her about it for the past six months, Payton kind of goes off the rails - in her own style, of course. She stops speaking to her parents, quits basketball, blows off big tests and assignments. When she's forced into counselling sessions at school, Payton is told to pick a Focus Object which will help her to put all of her energy into one thing with the hopes that in time she'll be able to deal with her feelings about her dad's MS.

Payton chooses as her focus object, Sean Griswold's Head. Which I just find hilarious. Due to alphabetical reasons, Sean has been sitting in front of Payton since always, and Payton suddenly realises she doesn't know anything about him. Like what he likes, who he lives with, how did he get that scar on his forehead? What starts off as this harmless exercise (OK, borderline stalking tendencies but in the name of counselling!) turns into the start of something new and sweet as Payton finds out more about Sean and that they could have more in common than they realise.

But of course, nothing is without bumps in the road. Payton's best friend Jac, while having good intentions does stick her nose in a bit too much for Payton's liking and they have very different views when it comes to the issues of getting into a relationship with Sean and of Payton's dad. But it's really Payton's overwhelming feelings of fear and anger towards her dad's illness and the fact that she wasn't told that sets Payton off on this weird little journey. At some point Payton will have to actually speak to her father and deal with this head-on.

I really loved this book. I loved the characters in this book, from Payton going through her rebellious teen phase, Jac, her lovable best friend and their relationship together. I thought Sean was brilliant as was Grady the Goth. I really liked that there was some focus on judging people for who they are and not on appearances.

I didn't know very much about MS before reading the book, but I thought it showed the effects of how this could change a family and a person really sympathetically. You can tell that Payton and her father used to have this great relationship before and it really felt heart-breaking to see them going through such a difficult period. My heart ached for the pair of them. Such a sweet story, this one. One I can highly recommend!

Written by Michelle Fluttering Butterflies at 08:13