REVIEW: The Look by Sophia Bennett 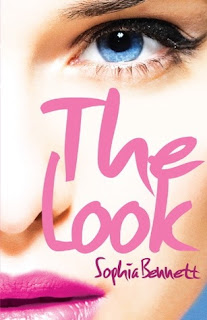 Oh I adored The Look by Sophia Bennett. And I knew I would. I've only read the one book by Sophia Bennett before (Threads, the first book in the series that's been called a 'fashion fairy-tale') but something about this striking cover, and the gorgeous pink-tipped page edges really grabbed me. And then I read the synopsis and I thought to myself 'AWW.'

I love this idea of being out and about and somebody somewhere spots something in you that you don't see yourself. So it happens with Ted Trout, 15 year old girl, who believes herself to be too plain and too tall. Especially in comparison to her beautiful, outgoing and fashion-forward older sister Ava. But as the two of them are humiliating themselves in public, busking in London, Ted is spotted by a model scout. Ted is all ready to ignore this possibly-creepy man and forget it ever happened, especially as everyone in Ted's life seems to think it's a practical joke or a scam as well.

But when Ava is diagnosed with cancer, Ted decides that the only thing to do to cheer up Ava is to go along and see what these modelling people have to say. And it turns out to be legitimate. So there Ted goes, starting this crazy journey into modelling. And for a long time, it's nothing glamourous at all. Ted finds it all very awkward and difficult to deal with, with each rejection and harsh comment on her appearance leaves her more and more dejected. But, just as Ted decides to quit and walk away, things change and move quite drastically in another direction. All of a sudden, Ted must question what's important in her life, where her priorities lie and how much she's willing to give to the fashion industry.

I really loved Ted as a character. I could completely relate to her insecurities over her appearance, her feelings of inadequacy as she compared herself to her big sister. But at the same time, Ted and Ava have this wonderful relationship. I loved seeing them bond over fashion and open up to each other as Ava's cancer treatments start getting more serious. So many different scenes with the two of them together brought tears to my eyes (especially the one in the hair salon!) but this isn't a sad cancer story. It feels really optimistic and hopeful, but at the same time touching on some hard thoughts and feelings.

As much as I loved seeing this glimpse into fashion and modelling, both low-level and the more high-end, my absolutely favourite aspect of The Look is witnessing Ted's journey towards growing in confidence. The way in which Ted is able to harness her inner-warrior princess was fantastic to see and I hope it really inspires other readers to be more accepting of their own appearance like it did for me.

The Look by Sophia Bennett is a wonderful story to read, one that I highly recommend.
Written by Michelle Fluttering Butterflies at 08:28