Take a look at my TBR shelves!

I recently saw on Jodie's blog, Books For Company, she'd posted pictures of her TBR shelves and piles. Now, I ADORE seeing other people's books, I really do. And for lack of any better idea for what to post today, I thought that I would share with you MY shelves and piles of unread books. (I have separate shelves for unread adult books!) Here we go... 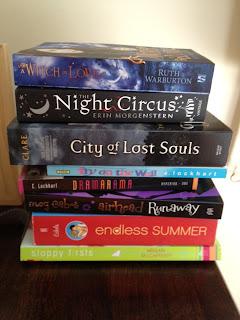 First up we have my bedside table.  I find the bedside table to be a weird place.  Mostly because I pick a stack of books that I think I'd like to read next ... and then when it comes to choosing my next book, I go to my shelves and pick something there! Ha.  The bottom half of this pile consists of some light-hearted summer reads and the top 3 I picked up the other day and it was easier to dump there than to put them away properly!

A Witch in Love by Ruth Warburon
The Night Circus by Erin Morgenstern
City of Lost Souls by Cassandra Clare
Fly on the Wall by E Lockhart
Dramarama by E Lockhart
Airhead: Runaway by Meg Cabot
Endless Summer by Jennifer Echols
Sloppy Firsts by Megan McCafferty 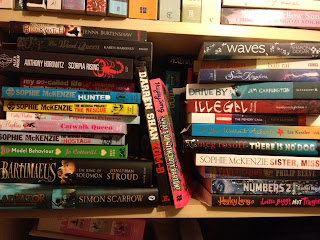 This is a fairly messy section of my bookshelves that live in my garage.  I thought it'd be easiest to take pictures first of the piles in the front and then show you what's behind them.  This two shelves are predominantly books by British authors.  I really want to plough through these books this year.  That started during June's British month, but as I never finished, I didn't get very far into these piles.  There's a third UKYA pile somewhere as well.  I'm currently reading What's Up With Jody Barton? by Hayley Long.

Zom-B by Darren Shan
What's Up With Jody Barton? by Hayley Long

Waves by Sharon Dogar
Rani and Sukh by Bali Rai
The Swan Kingdom by Zoe Marriott
Drive By by Jim Carrington
Illegal by Miriam Halahmy
The Memory Cage by Ruth Eastman
A Year Without Autumn by Liz Kessler
There Is No Dog by Meg Rosoff
Sister, Missing by Sophie McKenzie
Fever Crumb by Philip Reeve
Numbers 2 by Rachel Ward
Lottie Biggs Is Not Tragic by Hayley Long 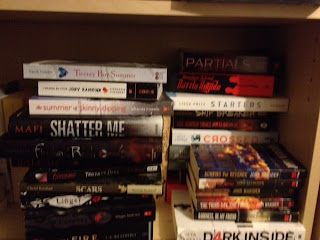 These two piles are a mixture of books.  The pile on the left seems to cross all genres, but the pile on the right is my zombie/dystopian/post-apocalytpic pile.  Sorry for the blurriness of this photo :( The lighting isn't great in my garage and I was using my camera phone.

Dark Inside by Jeyn Roberts
The Tomorrow series by John Marsden 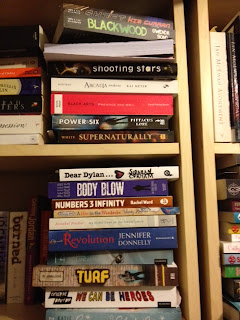 And yet more piles! The top pile looks to be all books sent for review from different publishers.  The bottom pile (I believe?) is yet another UKYA pile (with the exception of Jennifer Donnelly).

Dear Dylan by Siobhan Curham
Body Blow by Peter Cocks
Numbers 3 Infinity by Rachel Ward
A Hen in the Wardrobe by Wendy Meddour
My Sister Lives on the Mantlepiece by Annabel Pitcher
Revolution by Jennifer Donnelly
1.4 by Mike Lancaster
Turf by John Lucas
We Can Be Heroes by Catherine Bruton
Someone Else's Life by Katie Dale 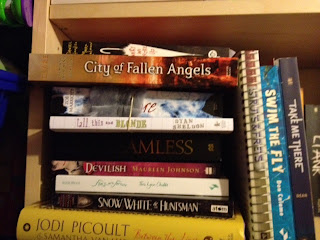 From these photos, I can tell you one thing for sure. I definitely need more shelf space.  Most of my books appear to be in piles! Ahhh.  I think this stack of mostly review books were books I wanted to read sooner rather than later.  But of course that term could apply to most of my books! 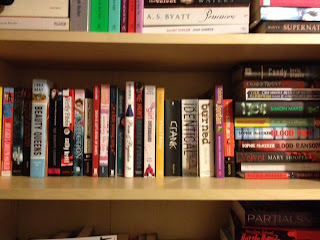 It is a little bit ridiculous, isn't it, that I only really have two shelves for my TBR books! I need more space desperately!  I will admit, I try to keep these books (piles on the end aside!) in roughly alphabetical order but I'm not too fussy it actually being in alphabetical order.  I'm lazy and sometimes just shove them in somewhere.  Pile at the end is another UKYA pile.

The Lone Ranger and Tonto Fistfight in Heaven by Sherman Alexie
The Future of Us by Jay Asher and Carolyn Macker
Taken by Storm by Jennifer Lyn Barnes
The Stuff of Nightmares by Malorie Blackman
Beauty Queens by Libba Bray
The Demon's Covenant by Sarah Rees Brennan
Verity Fibbs by Cathy Brett
The Selection by Kiera Cass
John Belushi Is Dead by Kathy Charles
Dash and Lily's Book of Dares by Rachel Cohn and David Levithan
Something Like Fate by Susane Colasanti
A Little Wanting Song by Cath Crowley
Mockingbird by Kathryn Erskine
Prom and Prejudice by Elizabeth Eulberg
The Hunt by Andrew Fukuda
Girl Overboard by Justina Chen Headley
Where I Belong by Gwendolyn Heasley
Crank by Ellen Hopkins
Identical by Ellen Hopkins
Burned by Ellen Hopkins
Catching Jordan by Miranda Keneally (Have since read!)
The Ballad of Suburbia by Stephanie Kuehnhert 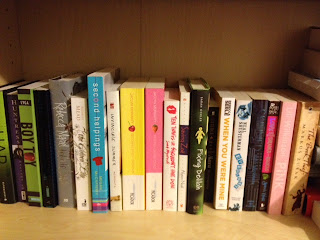 So these are the books I own and haven't yet read.  I'd love to see what are on your shelves!
Written by Michelle Fluttering Butterflies at 08:02