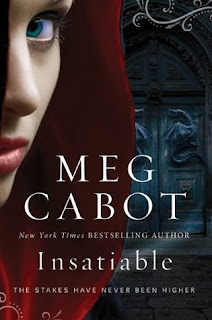 Oh I do adore Meg Cabot.  I was all set with my skepticism over Insatiable, Meg Cabot's adult book which is the first in a series about vampires.  But I don't know why I was doubting, it's Meg Cabot, so I found the story and the characters to be funny and strange and completely unexpected.

There is a lot of people completely tired of vampires.  Those people include Meena Harper, dialogue writer for a very popular and ongoing soap opera.  Meena Harper has a very special gift, one that allows her to know when other people are going to die.  This is a gift she hides from most people because no one ever believes her.  Instead, she goes out of her way to help strangers on the subway and gives subtle advice, hoping that the people she comes into contact with listen and are able to save their own lives.

But something Meena has never been able to do is see into her own future.  Which is why she isn't prepared at all for Lucien Antonescu, the prince of vampires that Meena quickly falls in love with.

I've always enjoyed Meg Cabot's novels.  It took me awhile to get into Insatiable and I found myself frustrated in the beginning with the multiple perspectives because I couldn't quite see how Alaric, the vampire hunter, fit into the storyline.  I didn't care for the suddeness of both Meena and Lucien declaring love for each other, though I'm sure that was intentional.  I thought the ending went a bit far and I was left open-mouthed in shock.  But still, I couldn't put the book down for anything.  And despite my misgivings about certain aspects of the book, I'm still determined and intrigued to know where this story will go!

I found Meena's character (as well as several of the other supporting characters) to be really funny, and I loved the inclusion of soap operas into the storyline.  I hope that continues, though it seems unlikely.  There's some brilliant references to other popular vampires in literature and television that made me smile.  I ended up forgiving Alaric for his shaky start into the story and I think Lucien has some hidden depths that I wouldn't mind exploring more in the next book.

Really, I just think that I'd read and love most anything by Meg Cabot! I loved the mixture in this book of romance, humour and plenty of action.
Written by Michelle Fluttering Butterflies at 08:30