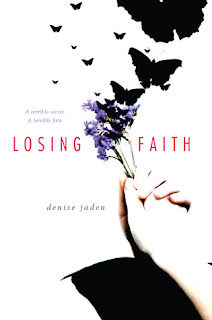 I picked up Losing Faith by Denise Jaden awhile back but by the time I got around to reading it, I wasn't entirely sure what it was about.  I went into this book knowing absolutely nothing about it except that it is a story of a girl grieving the death of her sister.  And in my head, I didn't quite expect this story.Because while it is very much a story of grief and of a family recovering from a major trauma, it is also the story of something else.

When Brie's sister, Faith, dies, Brie and everything in her life from family, friends, boyfriend seem to go off-kilter.  Nothing is the same and nothing really fits anymore.  And understandably Brie is more than a little curious about the events and the confusing information she learns about Faith's death.

Faith reportedly falls from a cliff one evening but Brie has questions about why she'd be anywhere near the cliffs at all, as Faith was meant to be at church group.  As Brie digs deeper, she finds a lot more conflicting evidence that really highlights how little Brie really knew of her sister and also of the things she'd been involved in before her death.  I really didn't imagine this story going where it did, but I think Denise Jaden did a decent job of pulling off the amount of religion in this book as well as the slightly weird turn of events.

It took me awhile to warm to Brie as a character.  It takes a really serious event for Brie to realise that she's surrounded herself with some really crappy people, mainly her best friend and her boyfriend, both of whom do horrible things that leave Brie in a worse situation than before.  But luckily Brie isn't a character that would just roll over at the hardships thrown her way and instead of wallowing, she picks herself up and moves on.  She befriends the goth girl, Tessa and home-schooled hottie, Alis, who both end up helping Brie unravel the mystery of Faith.

There's a lot going on in this story and while it isn't at all what I expected, I did enjoy it.  I will certainly be looking out for future books by Denise Jaden!
Written by Michelle Fluttering Butterflies at 09:03