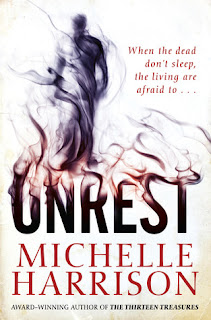 Unrest by Michelle Harrison is the first book I've read by this author.  I'll admit what initially attracted me to this story is the really eye-catching cover.  I just couldn't resist.  I also love the idea of reading more YA books from a male perspective which this book does as well as the creepiness that comes with a book about the spirit world and of out-of-body experiences.  Already I had high expectations before reading.

And Unrest is a really good book, one that didn't disappoint at all.  Despite reading this book during a busy time for me, every time I put the book down I'd be looking forward to getting back into it.  The story and the characters were really interesting and I was always left wanting more!

I really felt sorry for Elliott.  Months ago, he was involved in a car accident which left him clinically dead for several minutes.  Ever since then, he hasn't been sleeping well.  He's been experiencing some terrifying things when asleep - out of body experiences in which he's disconnected from his physical body, able to see ghosts, sometimes being paralysed.  In order to combat Elliott's feelings of fear relating to these episodes, he decides instead of avoiding the problem to place himself in a position of more terror.  Thus, he gets a job at a reportedly haunted museum so that he can tell if what he's seeing and feeling is actually real or all in his mind like his father and his doctors believe.

I thought it was pretty gutsy of Elliott to go towards the scary ghosts and put himself more in danger at new job, Past Lives.  I thought the idea of being part of a living museum like that would be a pretty awesome place to work just in general, never mind a haunted museum.  And I was officially creeped out several times during this story.  It makes me shudder even now the idea of leaving your body and having some thing else take over it.  And while Elliott is trying hard to find out more about psychics and mediums and ghosts and any sort of defense mechanism he can in order to keep him safe, there is also another sort of mystery going on with Past Lives and its employees.  I love the mixture of both storylines and the rather sweet relationship that Elliott begins with Ophelia.  There's a genuine build up here, and you can see actual friendship and reason for them to be with each other.  I absolutely loved it.  There's a slightly spoilerish quote that I'll add at the end which make me go 'AWW' when I was reading.

This book is utterly creepy and engrossing.  It's fascinating the information about ghosts and spirits and like I said, I just didn't want to put this book down.  I really recommend it!

I want the girl who wants and interesting portrait, not a beautiful one. I want the girl who's crazy enough to pull a fake gun on her enemies, who starts fights she knows she can't win. Who doesn't fall at someone's feet the minute she meets them. The girl who dances like she doesn't give a toss what anyone else thinks.

Written by Michelle Fluttering Butterflies at 08:46