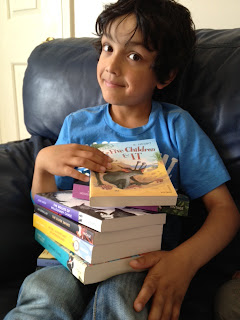 It's something I've been wanting to do for absolutely AGES, starting a family book club with my boys, but it took seeing these amazing new Vintage Classics range at the Random House Children's Books blogger brunch before I managed to get going with it.  As you can see, E is quite excited about it.  He's chosen Five Children and It by E Nesbit as his first choice.  Mostly, I believe, because we've already seen a film adaptation for it and he found it to be quite funny!  Look out for joint reviews of these books by both E and myself.

List of books we'll be reading in the very near future, and some of E's initial thoughts:

The Silver Sword by Ian Serraillier - This book looks like old and about war.  I'm not sure what it's about but I like the sound of swords.  I think it would be scary to be on my own like these children.


Alice's Adventures in Wonderland by Lewis Carroll - We've read chapter one so far and it's pretty funny so far. There's a hippopotamus in the middle of water. *laughs* I like the cover, because Alice is falling and it looks like 'ahhhhhhhh!'

Emil and the Detectives by Erich Kastner - I like detectives! Maybe there will be a missing bike stolen by an evil burglar? Because there's a bike on the cover? I like trains too, and I'd be excited to take a train on my own but I would be very angry if someone stole from me.

The Secret Garden by Frances Hodgson Burnett - I think, from the cover, a little girl is going to find a garden. The garden looks very old because everything is growing tall, over this house. I think I'll enjoy it because it used to be one of mommy's favourite books growing up.

The Wolves of Willoughby Chase by Joan Aiken - Wolves (E actually said 'it looks wolfy'). It looks like the wolves want to eat the two girls, which would be quite scary, I think. 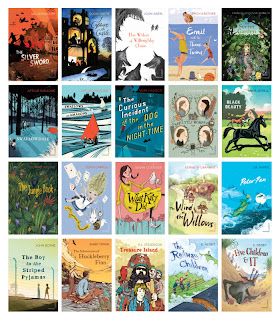 And if you're interested in the Vintage Classics range, you can check out their catalogue, and also their website, World of Stories, coming soon!  You will be seeing a lot more of these books here on the blog and I'm really quite excited to have a more interactive reading experience with my two lovely boys.

I hope you'll enjoy our posts as much as we'll enjoy reading these books and sharing our thoughts with you! Stay tuned, first review coming up very shortly!