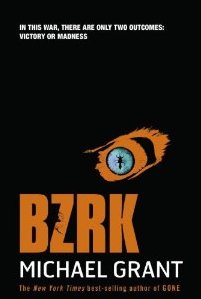 BZRK was my introduction to Michael Grant and I was expecting great things. It is about the battle between two sides; not only on the macro level (the physical world) but also the nano level (where nano technology is utilised within the human body) to disable the opposition. A lot of this happens simultaneously on both levels. BZRK is a very high concept novel which I can easily visualise as a movie. It reminded me of The Matrix because there is a whole world that is unseen by ordinary humans.

The storyline was enjoyable, though it did take me a while to get into it and to get used to the futuristic world, mostly because many terms had to be explained at the beginning of the story. Additionally, as there were multiple plotlines and multiple narrators, it was difficult to form emotional attachments to any one character. Many of the characters, like Vincent and Sadie seemed detached to begin with, however I grew to like them as time passed.

The characters I was interested in were Vincent because of his unusual disability; he is not able to experience pleasure and the Armstrong twins, the grotesque villains, who were something out of a nightmare. Nearly all of the characters surprise you. No one should be taken at face value in BZRK.

At first, it was hard to see how all the plotlines and the characters were linked but as I continued reading, everything began to fall into place very cleverly. As there were many points of view, I realised that the line between good and evil was becoming obscured. Both sides were committing crimes. I had a lot of questions throughout the novel, most of which were satisfyingly answered. There were some questions which won’t be answered until the sequel. However, BZRK ends superbly, leaving the reader in suspense and wanting more.

BZRK is an action-oriented novel with vivid, graphic and grotesque sequences. It is not for the faint of heart. I wished for more character introspection in BZRK as I know that would have made me care about what happened to the characters much more than I did. However, Grant did well to convey complex concepts with a large and varied cast of characters. I look forward to reading more from Michael Grant in future.

Interesting! Thanks Kulsuma
Written by Michelle Fluttering Butterflies at 08:17