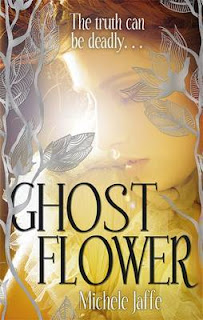 I read Ghost Flower by Michele Jaffe at the perfect time.  I had just finished Michele Jaffe's previous book, Rosebush, and was I thinking to myself how much I love psychological thrillers.  And lo and behold, I see Ghost Flower right in front of me.  And while Ghost Flower can be a bit confusing at times, I found myself really gripped by Jaffe's style of writing, the main character and the mystery at the heart of this novel.

Ghost Flower felt like a very different YA read to me.  Something about the tone of the novel and the subtle ways in which creepiness and uneasiness is added to the narrative made for a fascinating read.  And it really worked for me.  I was left so confused and wildly guessing at the different paths this book took.

Ghost Flower begins with our main character, Eve, a waitress in Arizona who keeps to herself after the recent death of her mother.  When two wealthy siblings, Bain and Brigitte, approach Eve with an insane offer, Eve has little reason not to carry on for a little while.  What Bain and Brigitte propose should be fairly straightforward - they would like Eve to impersonate their cousin, Aurora, who disappeared three years ago, and to whom Eve shares an uncanny resemblence, until 'Aurora's' 18th birthday when she comes into her inheritance.  When this happens, the money goes to Bain and Brigitte and Eve is paid a large amount of money and is free to carry on with her previous life.

But things really aren't that simple.  And as Eve carries on in the guise of Aurora, very strange things begin to happen.  Doing a bit of investigative work uncovers that the night Aurora fled from her life and her family is also the night of Aurora's best friend's apparent suicide.  Eve-as-Aurora begins to be haunted by the ghost of Aurora's best friend, and Eve-as-Aurora begins to question her own identity and history and also for her own safety.

I really loved the creepiness and unease of the second half of this book.  Everything begins to come together in a way that doesn't quite make sense and everything feels a little dark and eerie almost at once because the build-up is so subtly and easily done.  This makes for a really interesting and unsettling book, one that I very much enjoyed.

Written by Michelle Fluttering Butterflies at 08:31

Email ThisBlogThis!Share to TwitterShare to FacebookShare to Pinterest
Labels: atom, Books, reviews, YA