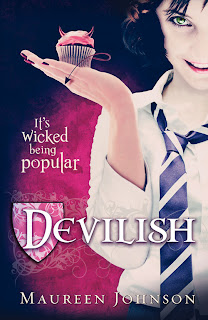 I was thrilled to hear that Harper Collins is publishing some of Maureen Johnson's earlier work here in the UK.  As much as I love her Shades of London series and I'm dying to read the next book in the series, I've also been incredibly curious to read the books that haven't been as readily available here in England.  I've enjoyed all of the books I have read by Maureen Johnson, and while Devilish can be quite fun, there was something lacking in it to move it up from being an okay read to one I absolutely loved.

Devilish is a book about popularity in high school and the lengths that some students would go to in order to achieve it.  The story starts out with a ceremony in which upperclassmen like Jane and Ally are to be paired as mentors with incoming freshman in a Big-Little event.  I didn't quite get the importance of this event, but aparently it's a big deal.

So when Ally humiliates herself in a big, flashy way, she feels like there's no hope for her whatsoever. Ally goes to incredible lengths in order to achieve popularity after the most embarassing moment of her life. And Ally will do anything to repair the damage done, including selling her soul to a demon in the form of new sophomore student, Lanalee.  But when Ally's best friend, Jane, finds out about it all SHE decides to make another deal with the demon in order to save Ally's soul.

I don't know. Some parts of Devilish really worked for me.  I quite liked Jane as a character, she had a fun personality and I liked how much her friendship with Ally meant to her.  I was hoping for a bigger sense of friendship between the pair, but it is mostly missing until the last third of the novel. I also like the wackiness of it.  I found myself laughing at the craziness of this book - demons and blood-soaked cupcakes and the fact that the show-down of good and evil happens at the Poodle-Prom. But while the quirky storyline kept me reading, I still didn't feel any great connection to the characters.
Written by Michelle Fluttering Butterflies at 08:56