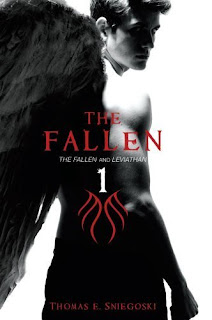 In The Fallen by Thomas E. Sniegoski, Aaron Corbett is a fairly average teenager who is about to have his world turned upside down. As a foster child he hasn’t had the easiest life as it is, but he’s finally found his feet with loving parents and a younger brother. When he turns 18 strange things start to happen to him. He has bad headaches, hears voices and can understand other languages. A homeless man (who happens to be the angel Ezekiel) tells Aaron he is a Nephilim (son of a mortal woman and an angel). And with the bodily changes comes greater danger, in the form of The Powers. Aaron soon finds himself being hunted by Verchiel, the head of The Powers, who wants to rid the world of the Nephilim, as he sees them as an affront to God. He also refuses to believe a Prophecy that states a Nephilim will reunite those angels who have fallen with God. Aaron must learn to control his burgeoning new powers and fight to survive.

I should confess a couple of things here. Firstly, angels are one of my least favourite paranormal beings and so I was bringing that to my reading of this. Secondly, the book I have has the second story in the series in it, Leviathan, but I’m afraid I didn’t get that far.

My main problem with the book was that I could not connect to Aaron. He’s not very emotional and although I can understand being in denial when you’re told your father was an angel, that can only take us so far, and eventually you just want him to accept and get on with it. But it’s not just that, everything he does
seems flat. There’s a very important scene that happens nearer the end of the book that deals with Aaron’s family, and it should cause you to feel something. Only it doesn’t, because Aaron’s reaction is so empty of all feeling you can’t work yourself up about it either. On a more general level, the writing didn’t pull me in and I never fully engaged with the story. I definitely got to the point where I was skimming rather than reading properly, just to get to the end.

There’s also a non-romance with a high school classmate, Vilma, which feels a bit stuck on. I imagine it progresses in the later books, but there was nothing really here to make me care about the relationship, or the girl herself.

My favourite thing about the book was the dog, Gabriel. This probably doesn’t sound like much praise, but I liked the way his voice comes across (Aaron can understand him) and he’s much needed comic relief. I suspect there could be confusion later if the angel Gabriel ever shows up in the series, but overall the dog is very entertaining and gave me one of the few moments in the book where I actually cared what happened.

I can’t give this one much of an endorsement, unless you’re a die-hard fan of angels. In that case it may be worth a look, but I suspect there are better stories out there for you.

Thanks for your honesty Carrie!
Written by Michelle Fluttering Butterflies at 08:01