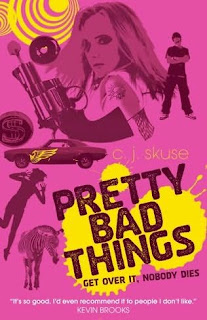 When twins Paisley and Beau were children they became famous for being lost in the woods after going looking for their father. They were discovered three days later after being presumed dead. Known as the ‘Wonder Twins’, the public followed their story for a while, with their grandmother cashing in on the celebrity. Ten years later and Paisley has been shipped off to one boarding school after another, losing place after place due to her bad behaviour. Beau is at home with the grandmother, bullied and alone at school. Their father is in prison and they haven’t heard from him since they were kids. Then Beau discovers letters their father has sent throughout the years, but their grandmother has kept hidden. Telling Paisley, they escape their grandmother’s clutches and go off in search of their dad.

Reaching Vegas, they are soon out of money, when Paisley hits on an idea. Rob candy stores and leave obscure messages only their dad will know, get on the news, and soon their dad will know they’re looking for him. Simple, right? It doesn’t all go to plan, but that doesn’t stop the Wonder Twins.

I enjoyed this one. It’s another quick and easy read, and it’s very entertaining. It switches point of view for each chapter, so we get to know Paisley and Beau equally. Beau is the quieter twin. He’s used to keeping his head down and not making trouble. Paisley…wouldn’t know how to keep her head down if she tried. If there were an evil twin here, it would be Paisley. Not that she’s actually evil, she just jumps into things without thinking, has a smart mouth and comes across as fearless, even if she is riddled with insecurities. There were times when I found her immensely unlikeable, and I wished she wasn’t dragging Beau into her schemes. I know they’re kids, but if they’d thought things through a bit more there are better ways of finding someone. Obviously that’s not the point of the story, but she did bug me a bit, and Beau too for not standing up to her more. I do understand why they acted they way they did, given the dynamic of their relationship and the lives they’d led to that point.

It’s a really fun book, with some brilliant dialogue and insane moments. Worth a look.

Thank you for that Carrie!
Written by Michelle Fluttering Butterflies at 08:39