REVIEW: The Prince Who Walked With Lions by Elizabeth Laird 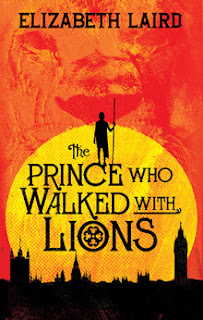 The Prince Who Walked With Lions by Elizabeth Laird isn't anything at all like I expected it to be.  Regardless of that, I still really enjoyed it and found the story to be both interesting and sad.  Having only read a small blurb about the story before I began reading, I guess I thought the book would be told more in the present from our main character's point of view as he struggles with bullies in his school.

But Alamayu is based on a real person and in this story, Elizabeth Laird recounts a fictional account of what occurred when the British conquer the Abyssinians by defeating Prince Alamayu's courageous father who had taken some British soldiers hostage.

This story, though very interesting in parts, is quite sad throughout. Poor Prince Alamayu witnesses firsthand the horrific deaths of his family and friends.  Afterwards, he is taken by the British back to England.  At the start of The Prince Who Walked With Lions, Alamayu is in the infirmary, telling this story in flashbacks.  It is this early part of his story, which details the exoticness of his life in what is now Ethiopia the most fascinating.  I wanted to know more about the life that Alamayu led before the British came into the picture.

Slowly though, Prince Alamayu begins to forget his Abyssinian heritage as he comes to England, is befriended by Queen Victoria and is educated to be a proper English gentleman.  His struggles to fit in with the other students though, is quite emotional and I could really relate to Alamayu's difficulties being caught between two cultures and trying to be true to himself.

This is an interesting historical read, but I think it would have made more of an emotional impact if more of the story was told in Alamayu's present.
Written by Michelle Fluttering Butterflies at 08:39