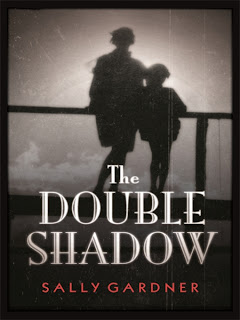 The Double Shadow by Sally Gardner is the perfect mix of magic, mystery and adventure against the backdrop of World War II. Amaryllis Ruben is a troubled seventeen year old who has been expelled from one too many boarding schools. Though she hates it, Amaryllis has no choice but to return home to her distant father. Amaryllis can’t remember much of her childhood and her father with whom she was supposedly once very close with which leads to her anger and frustration.

Her father, Arnold Ruben, has created a memory machine; a utopia where Amaryllis can relive her good memories for eternity, even ones her father has lovingly edited, safe from the bad memories of her childhood. However, it is not that simple. There are other people who would go to any lengths for such a weapon, especially in wartime, and Arnold has inadvertently led his daughter into danger he could never have fathomed. Can Amaryllis be saved?

Following multiple characters, The Double Shadow is a wonderfully imaginative piece of fiction which is both dark and constantly enlightening. Gardner’s writing style is lyrical and engaging. I felt involved with all the characters, especially Ezra, Amaryllis’ adversary and then reluctant friend. At first, Amaryllis is hard to like, but once you learn about her forgotten memories, it is easy to see how she turns out the way she does.

Other memorable characters were Vervaine Fox, who wanted to keep her good looks from fading (much like her career) and Tommy Treacle, who was smarter than anyone gave him credit for. The Double Shadow is a complex web of mystery (worthy of Sherlock Holmes) that is slowly untangled as the story goes on. I found it very suspenseful and read the book in a matter of days.

Overall, The Double Shadow is a brilliantly imagined world with a fantastic cast of characters, vivid writing and original ideas. I loved the history, the mystery and the science. There was a dramatic climax and a great ending. This was my first foray into Sally Gardner’s writing, but it won’t be the last. There is a little bit of everything in The Double Shadow and it is one not to be missed.

It sounds excellent, thanks Kulsuma!
Written by Michelle Fluttering Butterflies at 08:25