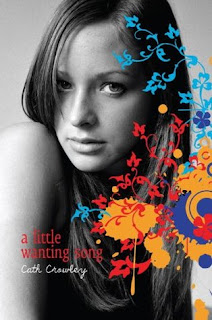 I was a fan after reading Graffiti Moon earlier in the year and on the strength of that book and after seeing a smattering of positive reviews for this book, I decided to buy A Little Wanting Song by Cath Crowley.  And straight away, I fell in love with the feel of this book and the beautiful way in which Cath Crowley unravels this story of friendship and wanting and romance for us.

A Little Wanting Song is told in two narratives.  The first is Charlie Duskin, a musician who sings only for herself in darkened rooms.  She's dealing with the loss of both her mother and her gran and the consequences of these losses has made Charlie's father pull away from her entirely.  What Charlie really wants is for her father to talk to her, take some notice of her.  What makes things worse for Charlie, is that she doesn't really have anyone else is her life.  She wants love and a boyfriend, but she also wants friendship - an emotional connection with somebody, anybody.

And then there's Rose.  She lives next door to Charlie's grandparents, but Charlie and Rose have never been friends.  Rose has her boyfriend Luke and another friend, Dave Robbie and a fairly good life in the country.  But Rose wants more.  She wants to live in the city and go to a private school and have more in her life than her mother has had.  She doesn't want to end up pregnant and be forced into a job that doesn't challenge her.  And Rose believes that the only way to do this is by befriending Charlie Duskin in the hopes that when Charlie's family leaves for the summer back to Melbourne, Rose will be with them.

I really loved this story.  Both girls have such strong feelings of longing that it's hard not to become emotionally involved in both of their stories.  I found myself more connected to Charlie's story.  I could really relate to the way in which Charlie holds herself away from people and instead watches from afar. She seems to hide within her music and she holds onto her Gran and to her mother by continuing to speak to them long after they've been truly gone. I found it heartbreaking the way in which Charlie's father barely speaks to her or acknowledges her presence.  I really liked Charlie's relationship with her grandfather and also how she seemed to grow in confidence over the course of the novel.  Some of Charlie's insights into herself, her family and life around her are so beautiful.

And Rose.  I really just wanted her to be a little more open with the truth when it came to befriending Charlie.  She's got a bit of an attitude and she's said some mean things about Charlie over the years, but it was still nice to see how much Rose changes too.  She has to be held a bit accountable for the 'Charlie Dorkin' song and there's plenty of ups and downs in her relationships Luke and Robbie.  I liked that she's a girl interested in science and can also see how lucky she is and how much she has by the end.

This is such a beautiful book and I don't feel as though I can do it justice in this review!  I highly recommend that you pick up this book and discover its beauty for yourself.
Written by Michelle Fluttering Butterflies at 08:48