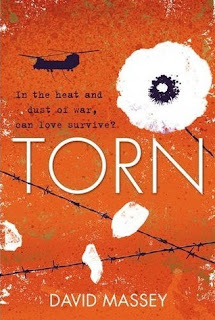 In Torn by David Massey, we are introduced to nineteen year old Ellie; a British army medic in Afghanistan for the first time. I was really interested in reading Torn because I haven’t read any books about the war in Afghanistan from a main character who is not a civilian. Ellie is an engaging, strong and likeable main character. Ellie is someone who takes action rather than waiting for others to do so. Though I understood that Ellie became a medic ‘to win hearts and minds’, I did wish there was more background to her character. I wanted to know more about her family, her training and her motivations.

Massey’s descriptions were amazing. I could easily visualise the glare of the sun and feel the waves of heat. Torn isn’t too graphic or violent which may seem surprising for a book about war, but Torn is more about conflict and mystery. Ellie sees a young girl willingly walking into the middle of a gun battle and tries to save her, but by the time she reaches her, the girl has disappeared. Throughout the rest of the book, Ellie tries to uncover the complex web of mystery surrounding the girl. The abstract way in which she was described was amazing and kept me guessing. However, I would have liked some more answers about the girl in the end.

I really liked the secondary characters; especially Husna. The struggle and hardship he and his companions went through left an emotional impact on me. They all felt very real. I felt let down by the romance aspect of Torn as it happened very quickly. I would have preferred more development. Torn deals with issues such as the politics of war, child soldiers and family. There are no easy answers in Torn.

Overall, Torn was a great book. As it is short, it can be read very quickly. Ellie is a strong and memorable character. I loved reading a story about current events. It was wonderful to read about the war from a very different perspective than that of a civilian. I look forward to reading more books by David Massey.