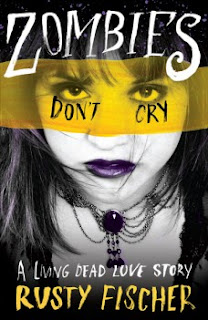 I have the great pleasure today of being part of the blog tour for Zombies Don't Cry by Rusty Fischer.  Zombies Don't Cry is a hugely fun take on zombis.  I love zombies so I was very excited to read this one.  My review will be up soon!

Before I hand you over to Rusty, who is here today talking about Halloween, here is the description of Zombies Don't Cry from GoodReads:

Maddy Swift is just an ordinary girl, until the fateful night when she is struck by lightning and wakes up face down in a puddle. Then it's goodbye to all things Normal – such as breathing and having a heartbeat – and hello to yellow vision and a whole new Afterlife.

Turns out there’s a lot more to being a zombie than shuffling and groaning, but surviving school as one of the living dead requires a totally different set of skills. And things don’t get any easier when Maddy realises that she’s not the reanimated student at Barracuda Bay High . . .

To find out more about Zombies Don't Cry or Rusty Fischer, please visit the following websites:


When the folks at Electric Monkey asked me to compare Halloween in American with October 31st in the UK, my first thought was… I’m not exactly the right American to ask.

Don’t get me wrong; I love Halloween, but maybe just a little…too… much. I mean, I’m pretty sure most US citizens don’t start listening to scary movie soundtracks in mid-September, or Google “Help! I’ve finally run out of candy corn” in late August.

In fact, my Halloween pretty much starts the minute kids go back to school in the States, which is generally mid-August. That’s when they start replacing the big wall of backpacks and school supplies in the back of Wal-Mart and Target with plug-in jack ‘o lanterns (yes, I own two, don’t judge) and blinking witch’s hats (nope, don’t own any). 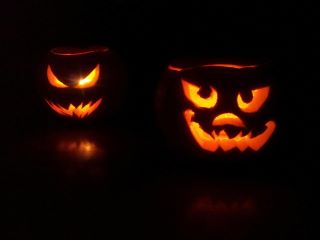 I’m not a big Halloween decorator, but a lot of folks here are. People go all out by turning their homes into haunted houses, complete with big, gassy fog machines that you can buy, complete with refillable fog juice, whatever that is, pretty much in any drug store in town from September on.

They have Halloween megastores, too, that open for a few months just to sell giant coffins with pop-up vampires or life-size zombies for hundreds of dollars.

And costumes. Tons of costumes. People go all out with their costumes, particularly the sexy nurse, sexy candy striper, sexy maid variety. Adults have costume parties. I’ve never actually been to one, but I hear they’re cool.

Kids get dressed up, too, and go trick or treating, which is basically where they knock on doors, shout “Trick or Treat” real loud and people give them candy to make them go away.

Folks spend a ton of money on candy here. Fancy trick or treat bags are huge, too. We used to just get them for free at the grocery store when I was a kid a hundred or so years ago, but now they blink and are shaped like ghosts and pumpkins and some even have straps like backpacks with drawstrings at the top to hold more loot than ever.

We live on a street with very few kids and the last few years I’ve bought twenty bucks worth of good candy, we’re talking like Snickers and Milky Way bars and Baby Ruths. And every year, the same three thugs show up – they’re about 15, which is WAY old to trick or treat anyway – around 9 o’clock which is also pretty late for trick or treaters.

Their costumes are lame and my wife is convinced they just get bored and say, “Hey, let’s go con those two suckers out of a Milky Way bar or two.” Which is exactly what happens; they show up just as I’m about to dig into my fourth scary movie of the night and I just want them to go so I hand them the bowl and say, “Play nice and split it amongst yourselves.” Then a feeding frenzy begins but I don’t care because by then I’ve shut the door and turned out the porch light.

My wife isn’t big into Halloween, and none of my friends really are, either, so for me the holiday has always been a mostly solitary affair that mainly revolves around food and scary movies. Most years I’ll make a double batch of popcorn, open a fresh bottle of diet root beer, snag a bag of candy corn (do you have this, candy corn? It’s awesomely gross, FYI) and put on the scariest movies I can find. 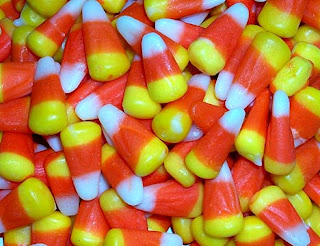 Other years I’ll head out to a movie theater and watch whatever is playing, usually one of the Saw movies or, lately, the Paranormal Properties. I generally wear a Halloween T-shirt, one of the five-dollar ones from Old Navy.

I’m lame, I know, but this is my Halloween and that’s how I roll. So, again, I know I’m not typical of most Americans when it comes to this holiday, but I’ve tried to hit on the highlights for you. I hope this helps and, if you’re ever in the neighborhood, don’t be shy. We could go trick or treating together. That is, if I remember how and can afford one of those newfangled trick or treat bags, that is!

Rusty Fischer is the author of Zombies Don’t Cry, as well as several other popular zombie books, including Panty Raid at Zombie High, Detention of the Living Dead and the Reanimated Readz series of 99-cent living dead shorts.