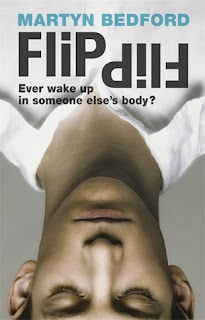 14 year old Alex wakes up one morning in a body that isn’t his. Instead he finds himself inside Phillip (Flip), in a town miles away from his home, and with a family who think he is still Flip. As they would, because Alex looks and talks just like Flip. There’s the obvious confusion and fear that such a situation brings about, but Alex manages to remain calm enough to go through the motions – which includes going to Flip’s school and studying subjects Alex knows nothing about – until he can find money to get back home. Surely once there he can explain everything and figure out how to become Alex again?

But there’s another shock – it’s been six months since the night he last lived as Alex. Where has he been all this time? Through internet searches and message boards he finds people who have gone through similar situations as his, but it looks bleaker than he first thought, as all those who have experienced it had died in their original bodies. Where is Alex’s real body now? Is he even alive?

One of the great things about this book is that the action starts immediately, there’s no slow build up, we don’t see Alex’s life before, we only learn about that after the fact. Instead he wakes up and we’re along for the ride, right there with him in his confusion, and trying to figure it out at the same time he is. And it stays gripping throughout.

I also really felt for Alex because it’s such an insane situation, and you wonder how you would react faced with the same thing. I understood his longing to get home and be with his family, and also that slim chance that they’d be able to see him for who he really is, and fix him. He’s in a house full of strangers, in a place he’s never been, no friends or allies to begin with. That’s got to be scary enough. But on top of the body switch it’s a lot to deal with.

It’s poignant in parts too, when Alex is coming to terms with being in this body and the loss of his family, and missing them. It shows how different the two boys are, both in looks and personality, but doesn’t exploit that for laughs or cheap jokes. It’s more serious than that, but that doesn’t mean the book is without humour. Alex is fairly ‘ordinary’. He is skinny, he plays chess, he’s not all that popular, though he does have friends. Flip, on the other hand, is very popular. He is handsome and athletic and has several girlfriends. Some of the things Alex has to deal with are these superficial things, what it’s like to be good looking and popular, and whether it’s all it’s made out to be.

This was a fairly quick read, but very enjoyable. Definitely one I’d recommend.