Mini-reviews (Game On, Through Dead Eyes, Dare You To)

I hope you don't mind mini-reviews today. I have fallen behind on my review-writing at the same time that I've been reading loads more than normal. Here are some of my thoughts on The Academy: Game On by Monica Seles, Through Dead Eyes by Chris Priestley and Dare You To by Katie McGarry! The Academy: Game On by Monica Seles

I am a huge fan of YA books involving sports.  I really hope that there are more of them published because there's something utterly appealing to me about reading about athletes and sports.  And while I thought The Academy: Game On was a little bit lacking in character depth and storyline, it was still interesting enough to read and it sets up the series in such a way that I probably would continue to read the series to satisfy my curiosity about where things are headed...

Game On is this first book for teenagers by professional tennis player, Monica Seles. In it, she writes of this well-respected and hard to get into sports academy for young athletes of every kind. At the Academy, they will have the best equipment and training and coaches that money can buy. And they have plenty of opportunities to make a success of themselves, if only they can navigate the bitchiness and competitiveness of the other students there.

This first book in the series introduces us to some key players at the academy - Maya, a new tennis star who just wants to keep her head down and focus on tennis and making something of herself. Unfortunately along the way she always meets Nicole, already a hot-shot tennis player who feels threatened by Maya but also brothers Jake and Travis.  Throughout the course of the novel Maya makes bad decision after another in order to fit in and to be well-liked by people who don't have her best interest at her.  While Maya starts off with good intentions the allure of success and popularity seem to get the better of her.  I'd have liked to see a bit more emotion in the writing as things especially towards the end felt a little bit detached, this is still an interesting start to a new series... 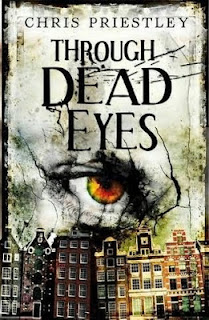 Through Dead Eyes by Chris Priestley

I've never read a book by this author before but what really attracted me to Through Dead Eyes by Chris Priestley is this very creepy cover and also that the book is set in Amsterdam, a place that I very recently visited. I really enjoy it when an author presents a place like Chris Priestley does with Amsterdam in such an accessible way.  Alex describes his first impressions of Amsterdam in a way that felt believable to me. I loved viewing his brief attempts at tourism along the canals and through the Red Light District and seeing the flower market and some of the major museums in Amsterdam were similar to my own.  It gives a great overview of what it might be like to visit this city for the first time, which made me happy.

And then together with this, there's also the very creepy and slightly sinister aspect of Alex finding this mask in a flea market that has connections to the little girl who lived in Alex and his dad's hotel centuries beforehand. Suddenly, Alex is pulled into a different and much older Amsterdam in which this little girl lived in and Alex can't help but want to find out more about her and what happened to her based on the experiences of hers that he witnesses through putting on the mask.

I did find the first two thirds of the book to be slightly slow-going.  There seemed to be a lot of detail and build-up towards something dramatic happening but that doesn't happen until very near the end.  I did really enjoy the fact that the conclusion to this story was very unexpected and came as a bit of a surprise! 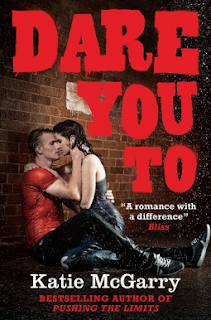 Dare You To by Katie McGarry

I really loved Dare You To by Katie McGarry. I had my doubts though! I didn't think it would possible to love another couple as much as I did Echo and Noah and I worried before picking up Dare You To that I might not warm to Beth as much as I did with Echo.  I needn't have worried.

Dare You To is wonderfully romantic and addictive reading.  And while Beth does come across in Pushing the Limits has being a bit hard and intimidating, you can tell right from the start of Dare You To how vulnerable and a bit broken she really is.  This was a very emotional book for me to read, especially considering Beth's homelife. Protecting her mother's drunken behaviour and her relationship with an abusive boyfriend at all costs means that Beth suffers a great deal. And because of the latest horrifying and illegal espisode, Beth is sent off to live with Beth's estranged uncle and his wife. There's plenty of history between Beth and her uncle and I really loved exploring this complicated relationship.

And then there's Ryan.  I have to say, I eye-rolled my way through the whole dare thing that weaves its way around this entire story but I did very much love Beth and Ryan together. Their relationship is super-charged with feeling and tension and when things finally did happen between them, I instantly cheered. Even though, like most of us Katie McGarry fans, we were still probably hoping that there may be some possible connection still between Beth and Isaiah... I'm really glad that Isaiah will be getting his own story because man, if ever there was a person who needed a happy ending, it's Isaiah!


What have been reading lately? Any of these three books?
Written by Michelle Fluttering Butterflies at 08:01