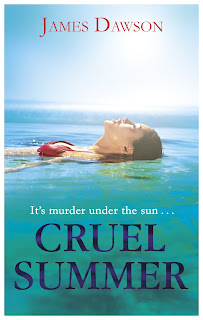 I'm very pleased today to be the first stop on the #murderonthebeach blog tour! Both Soul Storm by Kate Harrison and Cruel Summer by James Dawson are being published this month and I strongly urge you to go out and read both...

To find out more about Cruel Summer or James Dawson, please do visit the following websites:

For today, I have the first chapter of Cruel Summer, one of my most highly anticipated reads of the year. Do have a read below and let us know what you think in comments. Has it whetted your appetite for more?!


‘Katie? What do you think really happened to Janey?’

The first line is a voice-over. Opening shot: Pan from endless, star-spattered sky to a linear and deserted stretch of road in the middle of the Spanish countryside. You can tell it’s Spain because of the arid landscape, chatter of crickets and accompanying overture of * amenco guitars. The vista is barren; almost alien. It’s late at night. Slivers of wispy cloud trail over a jaundiced, sickly moon. Zoom in on a lonely silver rental car. It’s caked in thick orange dust as it pelts along the asphalt.

The headlights, even on high beam, only managed to cast a feeble pool of light along the abandoned highway. The road was rod straight – to Ryan, this really was the road to nowhere. He suddenly felt a long way from home.

RYAN HAYWARD RETURNS FOR A FEATURE-LENGTH HOLIDAY SPECIAL. Ryan often imagined his life as a long-running TV show in which he was the star. The high-school series had come to an end with Janey’s death and the last year had been his solo spin-off: Ryan: The Drama School Years or possibly Ryan: Acting Up. This holiday was supposed to be a ‘summer special’ – a ratings-winning reunion of the original cast: Ryan: One Year On. It was pretty sick, but what had happened to Janey had made quite the series finale. He knew it was wrong, but thinking of it all as a TV show, with himself and his friends as famous actors, made it somehow easier.

Janey wasn’t dead, she was just some actress whose contract was up.

‘What do you mean?’ His companion, Katie, was a pretty redhead with alabaster skin, almost luminous in the dark.

Ryan put his feet on the dashboard. The night was sauna-dry, like that wave of hot Spanish air that greets you as soon as the plane doors open. His bare legs stuck to the leatherette seats. He popped a duty-free sweet in his mouth. ‘And you believe that?’

Katie grabbed a sweet too. ‘Must we talk about Janey? Maybe we could pick a more cheerful subject, like vivisection or famine or something?’ she quipped. She focused on the road ahead, gripping the wheel a little tighter.

When someone young and beautiful dies, a shroud falls over a community. The sun stopped shining on Telscombe Cliffs when Janey Bradshaw vanished. It felt as though there were a blanket ban on laughter and no one was allowed to say her name except in reverence. You certainly weren’t allowed to ask questions. Ryan had questions.

‘Ryan, knock it off!’ Katie interrupted. Her almond-shaped eyes were wide, blue and sweet. She’d grown up this year – like all of them. She looked tired and thin, even a little gaunt. That was the ‘story arc’ this year – the aftermath. Katie Grant was Ryan’s high-school best friend and, quite literally, the ‘girl-next-door’. She was the first person he’d told that he was gay. She was pretty, but relatable; she was clever, but never aloof; she was deep, but not tortured. Or perhaps he was overthinking it slightly. In Ryan’s head, she was second in the credits after himself.

‘Talking about Janey was not the purpose of this holiday,’ Katie continued. ‘I think . . . I think we need to jolly well move on. It’s been a whole year. A monumentally hard year. You’ve been in Manchester. I’ve been up to my eyeballs in books. What we need now is R and R. I have had my 9 ll of teen angst. I was starting to feel like the protagonist in a vampire novel.’

Ryan laughed. ‘So not a good look. Maybe you’re right.’ He wanted the reunion to be a touching, heartfelt comedy, but since they’d left the hypermarket at the airport he’d had an odd displaced feeling – a sense of being lost. The bright lights of Madrid were far, far behind and Katie seemed to be driving them into oblivion.

He tried to shake it off. Unsolved mysteries had always bothered Ryan. That feeling of something you’ve forgotten to do – the weird panic in the night that you’ve left the oven on, or neglected to pay a bill. That was how he felt constantly about their dead friend. Things just didn’t add up. ‘You know, I miss her, though.’

‘Oh, God, I do too!’ Katie conceded. She tucked an escaped auburn curl behind her ear.

Ryan smiled. ‘Do you remember those plays we used to put on?’

‘For your poor mum? Gosh they were terrible!’ The car passed through what looked like orange groves. The crickets were out in full force – a cacophony. It took Ryan a moment to realise the shadowy triangles darting among the trees were bats, not birds.

‘Do you remember how I was always called David? I always wanted to be called David. What a lame-arse character name! You’d think I’d have been more creative. Something like Javier or Storm would have been better.’

Katie laughed, cloudy eyed on memory lane. ‘Janey and I were always twins. We were obsessed with Sweet Valley High. I was the good girl and she was the evil twin . . . what did we call ourselves?’

‘Shana and Lana!’ Ryan cackled. ‘Do you want to know a secret? I always longed to be Dana!’

Katie laughed so hard, she almost hit a stray dog in the middle of the road. She stood on the brakes and swerved around it. ‘Oh, my God! He came out of nowhere!’

Ryan took his feet down and steadied himself on the dashboard.

Katie gave his thigh a pat. ‘I missed you this year, Ry.’

‘I know. That old-school, romantic letter-writing thing never really worked, did it? But, after what happened . . . some serious drifting was probably inevitable.’

‘I promise, Lana.’ He leaned over and gave her a peck on the cheek. He’d missed her too, but things were different now. There was a question mark looming large over last summer. Loose plot ends that needed tying up. Viewers had been waiting on tenterhooks for a whole year. In TV you can’t leave loose ends; everything has to be resolved or you end up with a mess like Lost.

What really happened to Janey Bradshaw? Ryan had to confess that, although he’d been dying to catch up with the gang, part of the reason he’d agreed to the holiday had been to try to clear up the niggles he felt over Janey’s death. He just wanted some answers. Ryan didn’t believe for a second that Janey Bradshaw had killed herself.

What DID happen to Janey Bradshaw?! Cruel Summer by James Dawson is available now, and don't forget to visit the other stops on the #murderonthebeach blog tour!

Written by Michelle Fluttering Butterflies at 06:50

Email ThisBlogThis!Share to TwitterShare to FacebookShare to Pinterest
Labels: blog tour, Books, indigo, ukya in 2013, YA