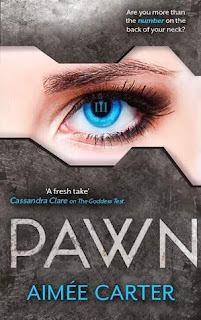 I was fairly excited to read Pawn by Aimee Carter as I really enjoyed her previous series based around the retelling of a Greek myth.  I was hoping that Pawn would similarly be a really engaging and fast-paced story with great characters.  And while it is quite fast-paced and is very quick to read, I found myself not really connecting with any of the main characters. And that is a shame.  It is the first book in the series being published in January by MiraInk and perhaps some of the issues that I had with Pawn will be addressed in the sequels...

Pawn is a dystopian story set in a world that deals with a merit system.  Every person must take a test and the results of that test will determine the type of job you will have, how well you are treated and generally the type of life that you will lead.  The number that your test decides you are is then permanently marked on your skin.  This system sees 1s and 2s at the lowest spectrum and at the top we have the 7s.  The only people in this society with 7s are the ruling family, the Harts. Their 7s are passed down from generation to generation and really go against the meritocracy of the rest of this society.

Kitty, our main character, is dyslexic and has grown up in an orphanage. She's told certain things about how the test will accommodate her extra needs but, of course, they don't and she ends up as a 3. In desperation she tries to run from her duties as a 3 and in the process catches the attention of some very powerful people.  She is offered a choice: be a 3 and leave everyone she knows and loves and do miserable, back-breaking work for the rest of her life OR join the Hart family and become a 7.  It seems a simple choice however joining forces with the Hart family comes with its own risks.

There is plenty of secrets and twists in this story. And while I did enjoy the mystery of it all and I really liked the political intrigue I wish there had been one or two more reliable characters. Somebody that Kitty and the reader could trust and not really question.  There is only one person in the entire novel that remained honest and loyal to Kitty and frankly, there wasn't enough of this character in the book for my liking.  Because of all the twists and secrets, I felt like I wasn't able to properly connect with Knox or Celia or anyone else. And therefore I also wasn't in a position to fully understand their motives for all of the deceit and dishonesty or anything else. And without that emotional connection I felt very distanced from the action and emotion.

I like the idea of this book.  It's an interesting story about sacrifice and social justice and equality and being true to yourself and fighting for what's right. But I feel like a lot of those messages were lost a little bit in all of the twists and turns. Perhaps things will be less muddled in future books!
Written by Michelle Fluttering Butterflies at 10:41