I'm a bit late with this monthly post this month, but better late than never, I suppose. I've already read and enjoyed Who Framed Klaris Cliff? by Nikki Sheehan and Storm and Stone by Joss Stirling. I do have a copy of Finding Jennifer Jones, Dead Silent and Rock War to hopefully read very soon. All of February just looks really good. I really can't wait to read Banished and Incinerator in particular and I'm hoping to get my hands on a copy of Bombmaker as well...

If you are a UKYA author who would like to write a guest post for Fluttering Butterflies, I would love to have you!  And of course, I'm sure I've missed out a title or two. If you can spot any I've missed do let me know.

Which of the following books are you most looking forward to? Let me know in comments. 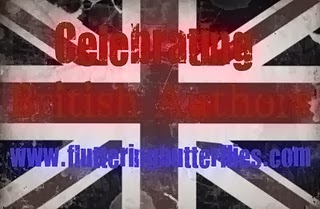 Jess Tennant has now been living in Port Sentinel for three months, and is just beginning to relax and think of it as home after the murderous events of the summer. But in the small hours of a dark night, a teenage boy is left for dead by the side of the road. Seb Dawson has a serious head injury and may not survive - and Jess decides to find out who beat him up, and why?

As she investigates, Jess discovers that Seb was involved in some very dangerous games. A secret predator around girls, he would do whatever it took to abuse them, from lying and blackmail to spiking drinks. Could a group of vengeful victims be behind his attack? Or is there someone else with a grudge against Seb and who will stop at nothing to silence him?

Sworn to protect, honour and slay. Because chaos won’t banish itself…

Kit is proud to be a Blackhart, now she’s encountered her unorthodox cousins and their strange lives. And her home-schooling now includes spells, fighting enemy fae and using ancient weapons. But it’s not until she rescues a rather handsome fae prince, fighting for his life on the edge of Blackhart Manor, that her training really kicks in. With her family away on various missions, Kit must protect Prince Thorn, rely on new friends and use her own unfamiliar magic to stay ahead of Thorn’s enemies. As things go from bad to apocalyptic, fae battle fae in a war that threatens to spill into the human world. Then Kit pits herself against the Elder Gods themselves – it’s that or lose everyone she’s learnt to love.

Born at midnight in London, on the stroke of the new millennium, Adam is the target of a cult that believes boys born on this date must die before the end of their thirteenth year. Twelve boys have been killed so far. Coron, the crazy cult leader, will stop at nothing to bring in his new kingdom. And now he is planning a bombing spectacular across London to celebrate the sacrifice of his final victim: Adam.

The year is 1646, tales of witches, murder and changelings are rife and a dark era is about to begin… Barnaby Nightingale is the perfect son; Strong, handsome, daring, everything his father wants him to be, and yet for his mother, Frances, he will never be the son she desires. Frances believes that her real son was taken from her as a baby by the local village folk who believed him to be a changeling, and Barnaby left in his place. Constantly disappointing his mother, Barnaby is spoiled by his father and despised by his younger brother, Abel. But when the beautiful and mysterious Naomi catches Barnaby's attention his world is thrown into chaos as superstition and dark folklore take hold of the small village and Naomi is accused of being a witch. Fear and suspicion spread and soon Barnaby finds himself on trial too and facing the ultimate penalty… death.

A snow angel etched in blood. An elite society. A secret dying to get out.
​
The second Poppy Sinclair Thriller.

When Poppy Sinclair and her boyfriend visit snowy Cambridge, she doesn't expect to discover the body of a student - arms outstretched in the act of smearing bloody angel wings on the chapel's floor.

Suddenly, Poppy is faced with the possibility that the one closest to her heart might be the one committing the most malicious of crimes.

Dodging porters and police, dreading what she might find, Poppy follows the clues left by a murderer bent on revenge...

Long-hidden secrets are chillingly revealed, an avenging angel seeks forgiveness and red-hot vengeance must be quelled in the amazing new Poppy Sinclair thriller.

Behind the ivy-clad walls of an exclusive boarding school, lurks a sinister web of corruption, scandal, and conspiracy. American student Raven Stone has noticed something is horribly wrong. First there were the unexplained disappearances. Then there were the teachers' lies. And now the death threats ...Also entangled in the disturbing turn of events is the enigmatic Kieran Storm - a fellow student with a killer intellect and a body to die for. He's heading for trouble and taking her with him. Raven can feel herself falling in love, but can she trust a boy she knows almost nothing about?

People used to call them 'friends' and said how they were good for your brain. And then a day came when all that changed . . . when they became our enemy.

Now, anyone found harbouring a rogue imaginary person is in for the Cosh, an operation that fries your imagination and zaps whatever's in there, out of existence.

That's why I wish Klaris Cliff had never shown up. And why I know that proving her innocence is the last hope I have of saving myself.

Funny, quirky, and intriguing. This is a gripping read.

Meet Jay. Summer. And Dylan.
Jay plays guitar, writes songs and dreams of being a rock star. But his ambitions are stifled by seven siblings and a terrible drummer.
Summer works hard at school, looks after her nan and has a one-in-a-million singing voice. But can her talent triumph over her nerves?
Dylan is happiest lying on his bunk smoking, but his school rugby coach has other ideas, and Dylan reluctantly joins a band to avoid crunching tackles and icy mud.
They're about to enter the biggest battle of their lives. And there's everything to play for.

Kate Rickman seems just like any other nineteen-year-old girl. She goes to university, she dates nice, normal boys and she works in her local tourist office at the weekend. But Kate's not really normal at all. 'Kate' is in fact a carefully constructed facade for a girl called Jennifer Jones - and it's a facade that's crumbling fast. Jennifer has spent the last nine years frantically trying to escape from her horrifying past. Increasingly desperate, Jennifer decides to do something drastic. She contacts the only other girl who might understand what she's dealing with, breaking every rule of her parole along the way. Lucy Bussell is the last person Jennifer expects any sympathy from, but she's also the last person she has left. Finding Jennifer Jones is the powerful sequel to the highly acclaimed, Carnegie Medal nominated Looking for JJ. It is a tense, emotional thriller about guilt, running away and wondering if you can ever truly know yourself.

The English government have closed the borders with their Celtic neighbours. Any Celt found in England is branded with a tattoo, found twice they are executed. Scottish Lizzie is the 'property' of psychopathic London gang boss Alexander. Can Lizzie escape Alexander's deadly grip and at what price her betrayal?

When a family holiday ends in tragedy, the grieving parents’ marriage is left in ruins and, Shiv, their 15-year-old daughter, is tormented by what happened … and her part in it. Off the rails and unable to live with her guilt, Shiv is sent away to an exclusive clinic that claims to “cure” people like her.

But this is no ordinary psychiatric institution and Shiv discovers that her release – from her demons, and from the clinic itself – will come, if it comes at all, at a bizarre and terrible price.


Which books are you most looking forward to reading in February?

Email ThisBlogThis!Share to TwitterShare to FacebookShare to Pinterest
Labels: ukya in 2014