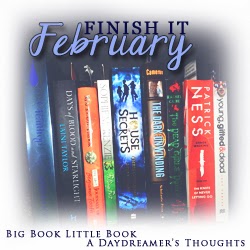 I'm taking part in Finish It February, are you?!

This is something that I've been thinking about since the beginning of the year... and then I saw Caroline and Faye talking about it on Twitter and it was like they read my mind. Here's the sign-up post, if you're interested. You can see the video that I filmed a week or so ago in which I just run through the number (and it is a large number!) of books that I have on my TBR shelves that are the second or third books in a series.  By the end of the year, I'd ideally like to be caught up with all of these series. By the end of February, I'd like to be caught up with the series by reading the following books:


How many unfinished series are you in the middle of or need to get caught up on?!
Written by Michelle Fluttering Butterflies at 07:32