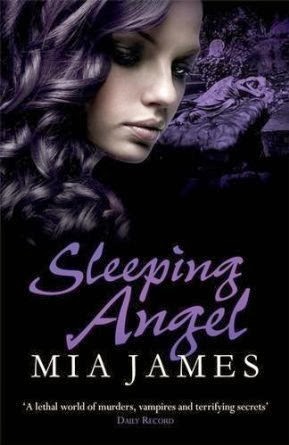 I've really enjoyed this series of books by Mia James.  This is the third (and final?) book in the trilogy.  Whenever I'm reading the books in this series I'm fully immersed in the world and the characters but when I picked up Sleeping Angel I was slightly worried as it had been awhile since I'd read By Midnight or Darkness Falls and I was afraid that too much time had passed and I wouldn't remember enough.  Thankfully, after the first few pages, I fell quite naturally back into this story and I thought this was by far the most interesting and thrilling of the three books so far as everything started falling into place and long-standing questions are finally answered.  This review will contain spoilers of By Midnight and Darkness Falls but not of Sleeping Angel.

I really loved getting back into this book. Sleeping Angel starts shortly after the events of Darkness Falls and April Dunne is dealing with the aftermath of her attack and the deaths of several people involved at Ravenwood Academy. She's living with her grandfather in Covent Garden, not really getting along with her mother but still madly in love with her vampire boyfriend, Gabriel.  She's absolutely determined to finally uncover the identity of the Vampire King in order to kill him and save Gabriel's life. In doing so, she'll also be able to find out the answers that surround the death of her father and so many others and hopefully stop this vampire takeover that has begun at Ravenwood.

One of the things I like the most about this series is April's friendships with both Caro, a new friend, and Fiona, her friend from when she lived in Scotland.  You can really feel how close April is with both of these girls and it was really lovely to witness how much Caro and Fee were willing to pitch in and help despite the danger to themselves.  And in Sleeping Angel, some of the more antagonistic relationships in the past play a larger part as well and I liked that there was some doubt about characters' motivations.

The thing that is at the heart of this series is this relationship between April and Gabriel.  Their relationship is the driving force of all the tension and the reason that April continues to drive forward in her pursuit towards finding the Vampire King despite the death and attacks that has chased April since her family have moved to Highgate.

The entire mystery of this book - the identity of the Vampire King, the conspiracy placed around Ravenwood, as well as some vandalism of April's father's grave - were all done really well.  I was quite excited to pick the book up again whenever I had to put it down and it was all very thrilling.  There were plenty of twists and turns throughout the book and lots of surprises around the big reveal.  And while I did feel like there was a slight info-dump at the end to wrap up all the loose ends, I was very happy with the way things ended.

I really loved the friendships and relationships in this series, I loved the atmosphere of Highgate and around London, and definitely the unravelling of this mystery! Fab series.
Written by Michelle Fluttering Butterflies at 07:32

Email ThisBlogThis!Share to TwitterShare to FacebookShare to Pinterest
Labels: Books, indigo, paranormals, reviews, ukya in 2014, YA