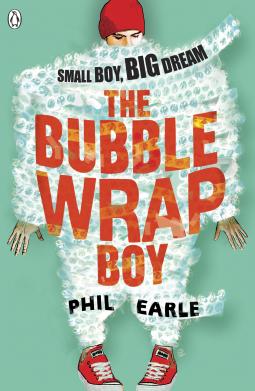 At the moment, I'm currently reading a wonderful book: The Bubble Wrap Boy by Phil Earle.  I'm really loving it.  It's much more light-hearted and funny than Phil Earle's previous books but there's just as much heart and emotion in this story as his others and I'm sure it won't be long at all until I've zipped right through it and I start raving about it to you all.  (It's being published on 1 May by Penguin!)

But I just wanted to talk to you a little bit today about one of the characters from The Bubble Wrap Boy.  Yes, I am only a third of the way through the book at the time of writing this and anything can happen with the storyline ... but already, Charlie's mum is one of my favourite characters ever. I love her. I do.  And I think the reason that I feel so strongly about her is that she could totally be me. Or I could be her.  And I thought that today, Mother's Day, would be the best day to celebrate her character. Let me start at the beginning.

The Bubble Wrap Boy is the story of Charlie Han, this (clumsy, small) boy who is completely and ridiculously over-protected and slightly suffocated by his mother. Who worries that Charlie will hurt himself or put himself in danger.  I don't know what Charlie's mum's secret is (that is hinted at in the product description!) because I haven't read that far. Right now, I'm just loving reading about the lengths she'll go to in order to protect her son.  And I love that Phil Earle presents her character to us in this really amusing way and how Charlie is (obviously) embarrassed about it all but mostly accepts it and then quietly rebels and Charlie's dad is all 'she's your mum, what can you do?' I laughed like a LOON at the mental image I had of poor Charlie (a teenager) riding along on a *tricycle* making his Chinese takeaway deliveries lit up in neon clothing. While in full daylight. Oh, I did laugh.  But also? I could relate. 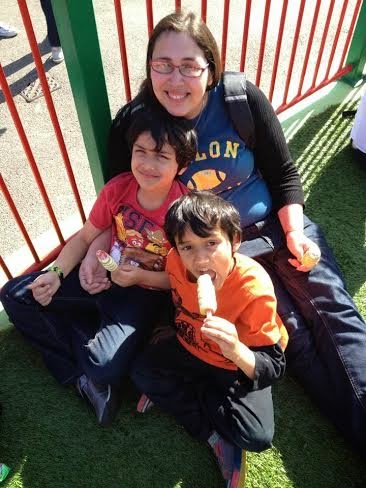 See, I've got two children. E and the Littlest.  And it's hard for me to accept that these boys are growing up and they're doing it quickly.  E will be 9 this year (surely not possible) and standing next to me, he's up to my shoulders already.  It won't be long until he's in double digits and taller than me and heading off to secondary school. And I will sob my little heart out. Because I look at him and his brother both and I don't just see him (or the Littlest) as they are right now but I can see them as newborn babies and as toddlers and little boys on their first days of school AND who they are now.  All in a montage sometimes.  And it can be so hard to take that step back and let them make mistakes or fall over or just do stuff independently. I so badly want to let loose my inner-Charlie's-mum and coddle them both so that they never cry or get hurt or anything. But I know I can't. Not forever, anyway.

It was different with E.  E's always been a little bit over-cautious. I've had to tell him sometimes over the years to take chances and do scary things.  But not so with the Littlest. He's always been a child who threw himself into things and didn't worry too much about the danger or how much I'd worry.  He just doesn't to be the sort to think 'what's the worst that could happen?' very seriously. And why should he? We went to an indoor skydiving thing the other week and my heart was in my throat for every second the Littlest was in the tunnel because there was no fear at all from him. He's 6 and I just have to take deep breaths and let him get on with things and reign in all my impulses to (over) protect him.  Because for so many things he doesn't want or need it.

So I get where Mrs. Han is coming from.  She wants to keep her child safe like any good parent does.  She just goes about it a little differently but probably with good reason.  I've had to work hard not to be a bubble wrap mother and I'll continue to work at it...

I can't make any promises about embarrassing my children though.  That's every parent's job, really.

I hope you all really enjoy this Mother's Day.  And if, like me, you can't share the actual day with your mother, then I hope you at least spend it with someone who understands what that means.
Written by Michelle Fluttering Butterflies at 09:24