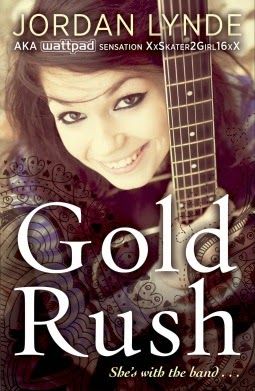 Gold Rush by Jordan Lynde is an ebook that is being published this month by Random House. I find it really interesting that books such as this, which was originally published on Wattpad by the teenage author, are attracting the attention of mainstream publishers.  I can't say that I loved Gold Rush, but I did enjoy parts of it, especially the diversity of sexualities within the book.

Gold Rush is the story of a girl, Iris, who is charged with showing around new classmates, Noah, Luke and Rian at the private school they all attend.  Iris is class president and really focused on her studies and doesn't need any distraction. And she also seems to be the only person in her school who doesn't lose her head and sensibilities around the new boys ... as they are the members of hot new boy band, Gold.

While I did feel like there needed to be more character development and something else to the story besides Iris and her friends' interactions with the members of Gold, it was still a fun book to read and I read it in a very short period of time.  A lot of the story revolves around Iris and her two best friends and how they become friends and love interests to the three Gold band members. We do see a little bit of the fan-frenzy that Gold face on a daily basis and we do see a little bit of them trying to be normal teenagers doing normal things. I thought it was great that the tables are turned slightly in the second half of the book where it's Gold who become a little starstruck by another band.  Overall though, it was a little bit too cheesy and slightly immature for me.  It's a bit too much 'OMG, you want to buy me a donut?' in parts and there's very little conflict.

What I did enjoy about the book the most though is the fact that there is a character who identifies as bisexual. He's open about it and accepted by his peers and because of the reactions this character has had about his sexuality, it pushes another character to come forward and tell people that he is gay.  I don't come across enough bisexual characters in YA, so this story line really kept me reading despite my problems with the rest of the story.

Written by Michelle Fluttering Butterflies at 11:44