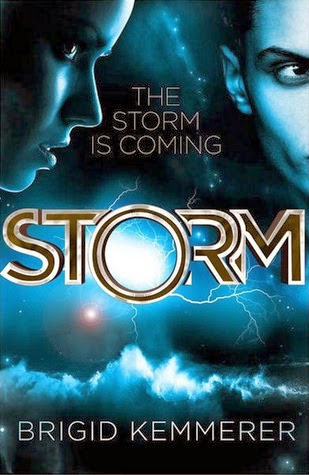 Oh, wow. Reading Storm by Brigid Kemmerer came as an absolute surprise.  I'd heard of the series beforehand and I was curious about it so I jumped at the chance to read and review this book for its UK publication. I'm not entirely sure what my expectations were going into this story but what I got was an incrediby exciting and addictive story populated by wonderful characters with interesting relationships, new and wonderful world-building and a story line that I could really get behind.  This book really blew me away and I am so excited to read more in this series!

In some ways, Storm, the first book in the Elementals series, is about Becca Chandler and in other ways I felt like this book was also a story about Chris Merrick AND also the rest of the Merrick brothers.  One of my favourite aspects about this book is that Brigid Kemmerer told us this story in such a way that I began to care about Becca and Chris but also all of Chris's brothers.  I love that we don't just get to see a very peripheral view of them but that there are actual substantial interactions between Becca ad all of them. I really liked it. I feel like I know each of them in some important ways before we will be introduced to them again when they come in their own stories in the future books in this series.

So, Storm, introduces us first to Becca and Chris.  Becca was a fantastic protaganist. I really felt for her throughout the entire novel.  She's had a bad experience with her ex-boyfriend that has left with her some bad memories and a really bad reputation.  She's going through a lot.  And one evening after leaving a self-defense class, Becca steps in and saves fellow student, Chris Merrick, as he's being beaten up by other boys. In doing so, she gets linked and involved in the lives of the Merrick brothers. The Merrick brothers themselves are all good-looking and keeping secrets, mostly about the powers stemming from the elements (water, earth, air and fire) they possess. But they also are in the middle of a feud between other families in this small town that put themselves and Becca in danger.
I'm really in awe of Brigid Kemmerer's skill in writing such an addicting and exciting book filled with such twists and turns. I thought I knew where the story was headed, especially in terms of the mysterious new student, Hunter, but at every turn, I found myself on the edge of my seat and surprised by the events that unfolded.
By this point I'm already half in love with Chris and all three of his brothers and I absolutely cannot wait to read more in this series! Incredible and highly recommended.
Written by Michelle Fluttering Butterflies at 07:01