REVIEW: The Fearless by Emma Pass 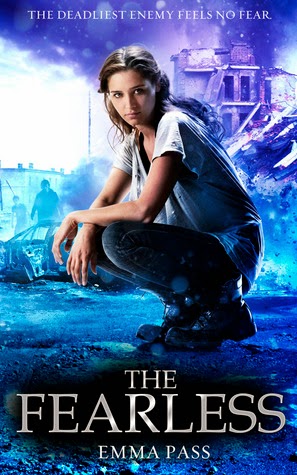 I really wanted to love The Fearless by Emma Pass.  It sounded like a really interesting post-apocalyptic story that would be tense and disturbing at the same time. And while I did really enjoy certain things about the book, other aspects of the story really didn't work for me.

The start of The Fearless is told from Cass's perspective when The Fearless are sort of unleashed on the world and we see how and why Cass ends up on the island of Hope.  I really enjoyed this part of the story.  I was on the edge of my seat, my heart was pounding, I didn't know what was going to happen next. It was all really nail-biting.

And in this beginning of the story we are introduced to our main character, Cass, who is a normal girl living in the UK with her parents. She catches some glimpses of news reports and some newspaper articles about some weird goings-on with a new drug being given to soldiers in a preventative measure for PTSD. As well as reducing the risk of PTSD, however, this new drug has meant that anyone who has taken this drug, effectively kills off all fear but also all love and empathy and they become The Fearless.  Strong, powerful, and lacking all humanity.  They are enough to strike fear into anybody's heart.  And when all of this is beginning, a friend of the family offers Cass and her parents refuge on this island, Hope.  And on the way there they are attacked by The Fearless.

The rest of the story is told from three viewpoints: Cass, Sol, Cass's childhood friend, and Myo, a stranger to the island.  I can definitely see why there are three viewpoints to the story and as all three were definitely beneficial to showing a wider variety of events as things go along. The story also jumps forward 7 years after the invasion of The Fearless and while Cass and Sol have been isolated on the island of Hope, their safety and belief in the island is shattered after the arrival of Myo and other more deadly occurrences mean that Cass must face The Fearless again after so many years. Here is where my issues begin to crop up.

My first issue with the book is that I never fully believed in any of the character's motivations.  Cass does impulsive things because of her love for another character in the book, but that relationship never felt real to me. Same with Myo.  We're told of his connection to his sister, Mara, but the only relationship that he is involved with that I truly believed in throughout the book was his affection for his dog, Lochie.

And while Cass and Sol are meant to be childhood friends, I didn't really believe in that either.  We can see straight away that Sol harbours feelings for Cass but I would have liked that to have been explored more. In fact, I would have liked there to be more character description and development in general for Sol.  He does a lot of things in this book that would make a person raise their eyebrow at, but throughout I always wanted to know why.  Why does he do the things he does? Why is Cass important, why has this character changed so much throughout his time at Hope?  I didn't get it.

So while I did like the idea of the fearless as zombie sort of creatures and I definitely want to see more UK based settings, I felt let down by the lack of character development and felt no real connection to the characters or their relationships together.  And that is a shame.  Perhaps you'll have better luck with this story!
Written by Michelle Fluttering Butterflies at 08:18